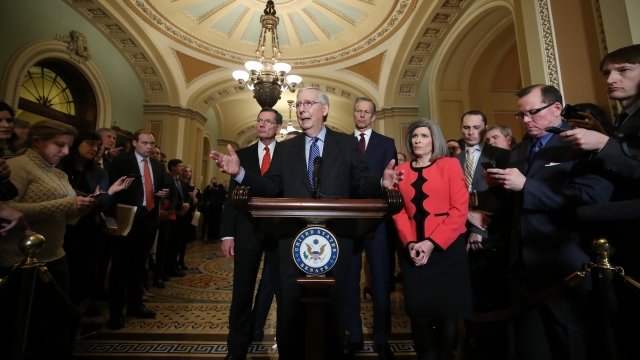 Senate Majority Leader Mitch McConnell says he has the votes to proceed with an impeachment trial.

"We have the votes, once the impeachment trial has begun, to pass a resolution essentially the same, very similar to the 100-to-nothing vote in the Clinton trial, which sets up, as you may recall, what could best be described as maybe a phase one," McConnell said.

The Senate needs to pass a resolution setting out guidelines for President Donald Trump's impeachment trial. The key issue is witnesses. Republicans say they're following the model used during the Clinton impeachment, which allows them to decide on any potential witnesses during a later phase of the trial.

"Well, I expect the first couple of weeks with the House managers and the defense and my colleagues to help inform that, whether we would call John Bolton or anyone else. My sense is, and probably my fear would be, is if we call one witness, we'll call all witnesses. And we have to be prepared for that eventuality," said Sen. Kevin Cramer.

Democrats are looking for a guarantee that witnesses will be called. And they say comparisons to the Clinton impeachment neglect a key difference.

"In the Clinton trial, specifically, all the witnesses that were requested to testify in the Senate trial had already given testimony under oath, under penalty of perjury, in previous related proceedings. Whereas the witnesses that we have called for have not given any testimony," Sen. Chris Van Hollen said.

McConnell said he won't make any moves until the House of Representatives officially sends the two articles of impeachment to the Senate.

House Speaker Nancy Pelosi has been delaying that step. She's criticized McConnell and accused him of coordinating a cover up with the White House.