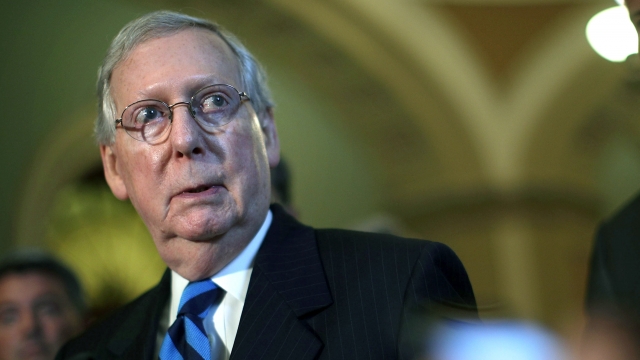 In an op-ed published Friday in the Washington Post, McConnell called the troop withdrawal "a grave strategic mistake ... [that] will leave the American people and homeland less safe, embolden our enemies, and weaken important alliances." He said, "the combination of a U.S. pullback and the escalating Turkish-Kurdish hostilities is creating a strategic nightmare for our country." He also urged the Trump administration to reverse course, saying not doing so "will invite the brutal Assad regime in Syria and its Iranian backers to expand their influence." He added that the move ignores Russian efforts in Syria "to amass power and influence throughout the Middle East and beyond."

The Republican senator's comments come a day after Vice President Mike Pence announced that the U.S. and Turkey had agreed to a five-day cease-fire in the region. But McConnell criticized that move as well, saying that even if the cease-fire holds, "events of the past week have set back the United States' campaign against the Islamic State and other terrorists."

The cease-fire has already gotten off to a rocky start, with Kurdish leaders accusing Turkey of violating the accord with continued fighting. President Trump said he spoke with Turkish President Recep Tayyip Erdoğan, who chalked up the earlier issue as "minor sniper and mortar fire that was quickly eliminated" and assured him that "he very much wants the ceasefire ... to work." He continued to defend his decision, saying, "Think of how many lives we saved in Syria and Turkey by getting a ceasefire yesterday. There is good will on both sides & a really good chance for success."