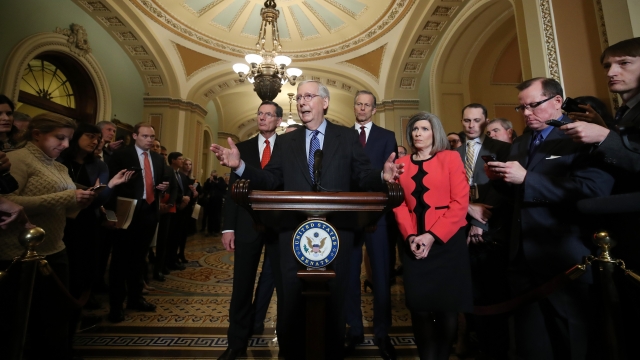 Senate Majority Leader Mitch McConnell has signed on to Sen. Josh Hawley's resolution. The resolution would dismiss articles of impeachment against President Donald Trump for failure to prosecute.

The Senate is waiting for House Speaker Nancy Pelosi to send over the articles so it can begin the impeachment trial. It's been more than 20 days since the House voted to impeach President Trump. Hawley's resolution would let the Senate move to dismiss any articles for lack of prosecution if the articles are withheld for 25 calendar days "from the date of adoption." The resolution needs 67 votes to pass.

In a response Friday, Pelosi tweeted: "By joining a resolution to dismiss, Sen. McConnell showed his true colors. Americans have now seen what is at stake in a fair trial with witnesses & evidence, and new evidence has emerged. Every Senator will have to vote: is their loyalty is to the President or the Constitution?"

Pelsoi is indicating she is getting closer to submitting the impeachment articles. On Friday, Pelosi said she asked House Judiciary Committee Chairman Jerry Nadler to prepare a resolution appointing managers for the Senate trial.

"We are ready," Pelosi said. "We are proud of our defense of the constitution of the United States. We are concerned that the Senators will not be able to live up to the oath that they must take to have an impartial trial."

Previously, Pelosi said she wouldn't send the articles until the Senate demonstrates it will hold a fair trial: one that includes witnesses and requested documents. But so far, McConnell said he won't be calling any witnesses, at least at first, but may decide to bring in witnesses later on. And GOP Sen. Lindsay Graham says Pelosi can't tell the Senate what to do.

"I think the Senate is getting annoyed with this game she's playing," Sen. Lindsey Graham said. "She's trying to control the Senate. We'll have a trial, everybody will get to vote for witnesses or not vote for witnesses and the President will have his day in court and so will the House managers. I think it's pretty clear we'll do it without her."

On Thursday, Graham, the chairman of the Senate Judiciary Committee, introduced a resolution demanding Pelosi "immediately" send the two articles to the Senate. Twenty-six Republican Senators have signed on to the resolution.