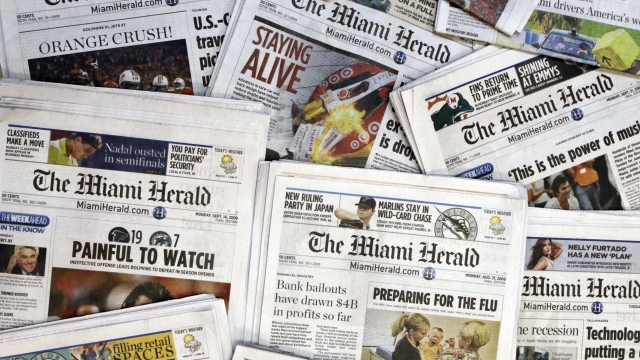 The McClatchy Company announced on Thursday that it has filed for Chapter 11 protections — a move that will likely end family control of the nation's second-largest local news company. The company plans to hand over the reins to a New Jersey-based hedge fund, which will run it as a privately held organization.

McClatchy said it would continue to operate normally as it restructures its pension and debt obligations. Kevin McClatchy, the company's chairman, called the expected handover a "sad milestone after 163 years of family control." But he said McClatchy remains "committed to essential local news and information."

The company's legacy dates back to 1857, when it first published a four-page paper in Sacramento, California. It currently operates 30 papers across 14 states, including the Miami Herald, Charlotte Observer, Kansas City Star and Tacoma, Washington's News Tribune.

Kevin McClatchy noted that the company's financial woes could be attributed to the scale of its "75-year-old pension plan," which reportedly covers more than 24,000 current and future retirees.

But the company has struggled with declining revenues and debt in recent years, especially since acquiring the Knight-Ridder newspaper chain in 2006 for $4.5 billion. Last November, McClatchy announced it would cut Saturday print issues network-wide by the end of 2020. But for some news industry observers, McClatchy's announcement is yet another indicator of a more worrying trend: the ongoing consolidation and collapse of local news.

Vilk said consolidation often leads to news coverage that is "less diverse, less local and more national" — and that's "not good news for communities or for democracy."

"The time has come for us to radically rethink how we think about local journalism in this country, so that we don't just think of it as a commercial good but actually think of it as a public good," said Vilk. "A service that is so vital to communities and to democracy that it deserves not only private sector support but actually philanthropic support and public support."