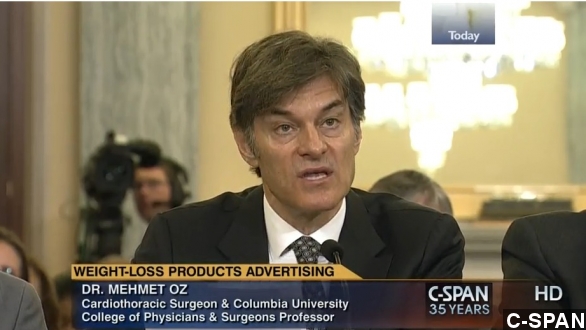 The TV doctor testified at a Congressional hearing Tuesday over dubious health claims he made on his show.

Senators on Capital Hill blasted Dr. Mehmet Oz Tuesday at a Congressional hearing, as the celebrity doctor fell under heavy scrutiny for promoting health products and weight-loss ideas on his TV show that Congress believed were bogus. (Via Wikimedia Commons / David Berkowitz)

SENATOR MCCASKILL: "When you call a product a miracle and something you can buy, and it's something that gives people false hope... I just don't think you needed to go there."

DR. OZ: "My job on the show is to be a cheerleader for the audience." (Via CNN)

DR.OZ: "I used flowery language. I used language that was very passionate but ended up not being helpful but incendiary."

​SENATOR MCCASKILL: "I don't get why you need to say this stuff because you know it's not true." (Via NBC)

Senator McCaskill chairs the subcommittee on Consumer Protection, Product Safety and Insurance, which goes after false ads and products that lack scientific merit. (Via U.S. Senate)

So, it's easy to see how Dr. Oz was at the forefront of the conversation given he pulls in about 12 million viewers per health-branded show, according to CBS.

As expected the product exploded: the so-called "Dr. Oz Effect." Problem is, that included hack products as well.

The Federal Trade Commission went after and sued the marketers behind the Pure Green Coffee dietary supplement pill who started making wild claims within weeks of the program, like: "lose 20 pounds in four weeks" and "lose 20 pounds and two to four inches of belly fat in two to three months."

"People want to believe they take an itty bitty pill to push fat out of their body. ... I know you know how much power you have. ... And, you are being made an example of today because of the power you have in this space." (Via CBS)

Though, Dr. Oz was very clear he didn't receive any kickbacks nor did he want them.

"I don't sell anything. If they see my name, my picture, or any part of the show involved in an advertisement, do not buy the product." (Via ABC)