GOP Leader: Canada Keeps US Wine Out Of Its Supermarkets — Really? 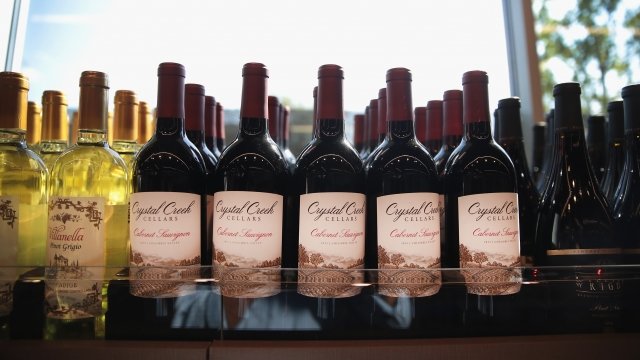 What's the virtue in a trade dispute with Canada? House Majority Leader Kevin McCarthy has some ideas.

"If you're talking about Canada, look what they do when it comes to our dairy products, look what — our wine cannot sit on their supermarkets," McCarthy said.

Does Canada really keep U.S. wine from sitting on its supermarket shelves? Well, as a whole, no. There's a lot of context missing in what McCarthy said.

British Columbia, does, in fact, have a law that largely keeps any wine but that made in British Columbia from being sold in supermarkets. BC grocery stores that want to sell imported wine, too, have to do it in a separate area with its own cash registers and exit. A more expensive so-called store-within-a-store.

The U.S. has formally complained about that rule, as have several other wine-making countries. Other rules that U.S. wine-makers think are unfair are in place in Ontario and Quebec, too.

But the BC-wine-only restriction only applies in one of Canada's provinces. And people can buy wine from more than just grocery stores. Experts say government-run liquor stores are probably the main source of wine for Canadian connoisseurs. Plus, the U.S. still ranks first among all nations in the dollar amount of wine brought into Canada.

So picking out that rule from British Columbia and making it seem as though it's a country-wide embargo is very misleading.