McCain Returns To Senate, Urges Colleagues To 'Trust Each Other' 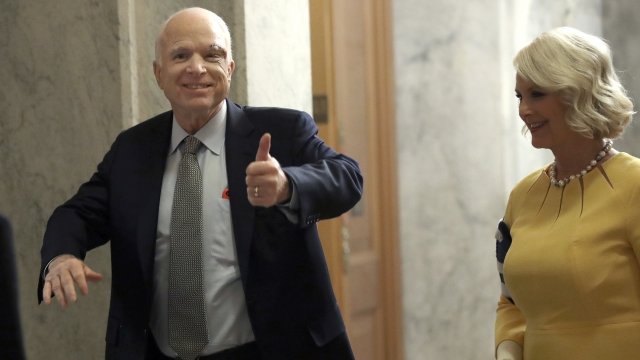 SMS
McCain Returns To Senate, Urges Colleagues To 'Trust Each Other'

By Lauren Stephenson
July 25, 2017
In his first speech on the Senate floor since his cancer diagnosis, Sen. John McCain urged his colleagues to return to regular order.
SHOW TRANSCRIPT

Sen. John McCain returned to the Senate floor Tuesday, less than a week after announcing he has been diagnosed with brain cancer.

After casting his vote to begin debate on the health care bill, McCain urged his colleagues to "trust each other" and "return to regular order."

McCain voted on the motion to proceed to consider the health care bill Tuesday, saying he wanted "to allow debate to continue and amendments to be offered." McCain also said he can't support the bill in its current form.

"If this process ends in failure, which seems likely, then let's return to regular order," McCain said on the Senate floor.

That would mean allowing the Senate's Health, Education, Labor and Pensions committee to work on a bill.

"Let's see if we can pass something that will be imperfect, full of compromises, and not very pleasing to implacable partisans on either side, but that might provide workable solutions to problems Americans are struggling with today," McCain said. 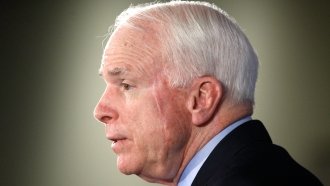 The senior senator from Arizona said the Senate's actions have been "more partisan, more tribal more of the time than any other time" he can remember.

"We've been spinning our wheels on too many important issues because we keep trying to find a way to win without help from across the aisle. That's an approach that's been employed by both sides," he said.

And he has served in the Senate for 30 years.

"Stop listening to the bombastic loudmouths on the radio and television and the internet. To hell with them. They don't want anything done for the public good. Our incapacity is their livelihood," he said.

McCain said he plans to remain on Capitol Hill for a few days. He then plans to return to Arizona for treatment.

"I have every intention of returning here and giving many of you cause to regret all the nice things you said about me," McCain said.