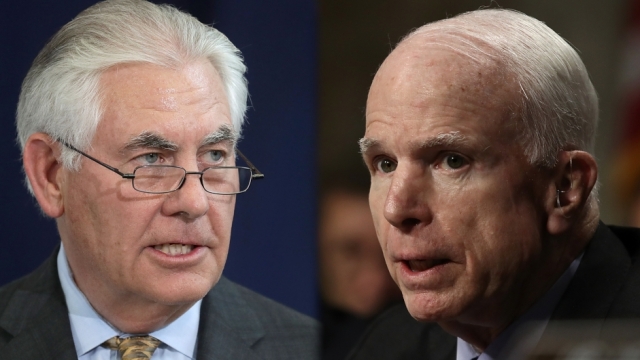 The piece, published in The New York Times on Monday, takes issue with comments Tillerson made during a speech to State Department employees last week.

Tillerson said he wanted to address how President Trump's "America First" policy meshes with U.S. foreign policy. And he started by saying policies and values are two different things.

"If we condition too heavily that others must adopt this value that we've come to over a long history of our own, it really creates obstacles to our ability to advance our national security interests, our economic interests," Tillerson said.

McCain, a former prisoner of war in Vietnam, speaks of his experience and that of a human rights activist who spent nearly a decade in Soviet prisons. He writes that as prisoners, hearing that Americans hadn't forgotten about them gave them hope that fueled their resistance — otherwise, they might "have given in to despair." 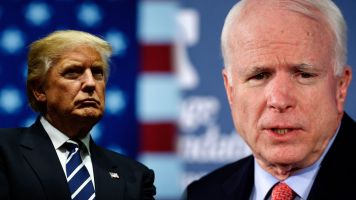 In the op-ed, McCain says Tillerson's statements sent the following message to oppressed people: "Don't look to the United States for hope. Our values make us sympathetic to your plight, and, when it's convenient, we might officially express that sympathy. But we make policy to serve our interests, which are not related to our values."

To be fair, Tillerson didn't say that we shouldn't ever demand a certain treatment of people as a condition of policy. Rather, he said it may not be "the case in every situation."

"It doesn't mean that we don't advocate for and aspire to freedom, human dignity, and the treatment of people the world over. We do," Tillerson said.

But McCain argues that viewing values as separate from policy can be "dangerous." He writes: "To view foreign policy as simply transactional is more dangerous than its proponents realize. Depriving the oppressed of a beacon of hope could lose us the world we have built and thrived in."

McCain has previously criticized the Trump administration on a range of issues from its first travel ban executive order to President Trump's description of the press as "the enemy of the people."