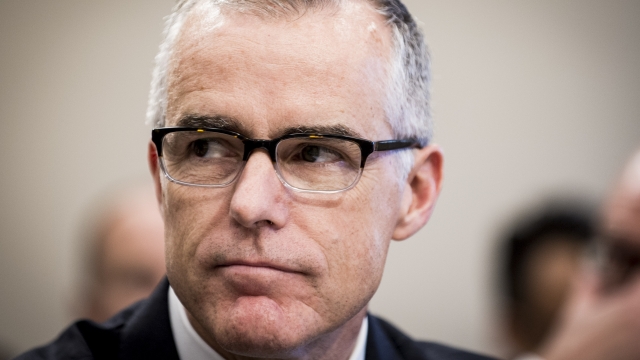 During an interview with CBS's "60 Minutes," McCabe said DOJ officials talked about recruiting cabinet members to invoke the 25th Amendment in the spring of 2017, not long after President Trump decided to dismiss Comey as FBI director.

Invoking the 25th Amendment allows the vice president and a majority of cabinet members to remove a sitting president from office by declaring him "unable to discharge the powers and duties of his office."

McCabe's comments confirm claims made in a New York Times article published in September. At the time, Rosenstein denied the report, calling it "inaccurate and factually incorrect." And the DOJ reiterated that denial in response to McCabe's interview.

McCabe also told CBS he ordered the FBI team investigating Russian election interference to expand their probe to look at whether President Trump obstructed justice. McCabe said he did that to make sure the Russia case was "on absolutely solid ground" in case he got fired too.

As it turns out, McCabe lost his job in March after the DOJ accused him of misleading investigators about his disclosures to the press. His full "60 Minutes" interview is set to air on Sunday.