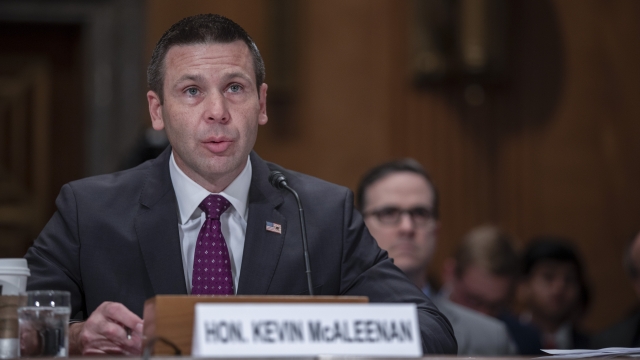 SMS
Acting DHS Secretary Says Timing Of ICE Raids 'Was Unfortunate'
By Caitlin Baldwin
By Caitlin Baldwin
August 12, 2019
McAleenan called the timing of immigration raids in Mississippi "unfortunate," but said the operation had been planned for over a year.
SHOW TRANSCRIPT

Acting Homeland Security Secretary Kevin McAleenan said the timing of the immigration raids in Mississippi was "unfortunate." He made the comment on NBC's "Meet The Press."

Last week, U.S. Immigration and Customs Enforcement officers detained around 680 undocumented workers in a raid in Mississippi. McAleenan told Todd the operation had been planned for over a year and involved 14 federal warrants.

DHS has been criticized for its handing of the operation after dozens of children were left stranded at schools after their parents were detained.

During the interview, McAleenan said: "ICE took great pains to make sure that there were no child dependent care issues that were ignored. ... They took this very seriously. They had a process with 14 different caseworkers and phones available to call and find parents and kids and make arrangements. So this was done with sensitivity."

The mass detention in Mississippi closely followed two mass shootings this month in Dayton, Ohio, and El Paso, Texas. Eight Mexican nationals were killed in the El Paso attack, and the suspect in that shooting reportedly told police he was targeting "Mexicans." He's also reportedly connected to a racist, anti-immigrant "manifesto" posted online shortly before the shooting.

McAleenan told Todd, "The national counterterrorism strategy, for the first time, prioritizes domestic terrorism in multiple places and calls out racially motivated violent extremism, and we've taken that direction and moved forward on it."