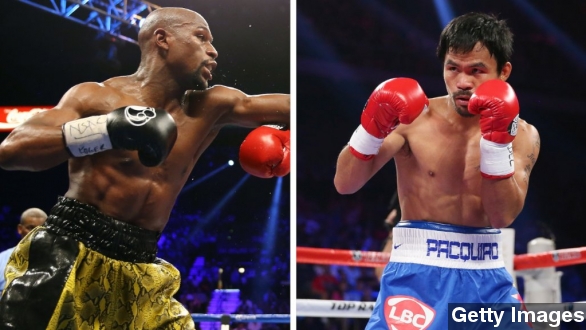 It's looking like we're one step closer to the much-talked about, little-done-about boxing matchup between Floyd Mayweather Jr. and Manny Pacquiao.

The Los Angeles Times reports HBO and Showtime are negotiating how to broadcast the bout since Mayweather is contracted by Showtime and Pacquiao by HBO.

The outlet points out the last time a duel-cast match was broadcast was the Lennox Lewis-Mike Tyson heavyweight fight. But before you get too excited about the potential of a Mayweather-Pacquiao matchup, let's flash back.

"Who might be next?" ESPN anchor Brian Kenny asked.

Kenny responded, "All right, how about Manny Pacquiao?"

"If he want it, he can get it," Mayweather said.

The boxers' reps even struck a deal in 2009, and the premiere matchup almost happened in 2010.

But both sides bickered over drug testing. Pacquiao agreed to random urine tests but wouldn't agree to having his blood drawn the week of the fight.

At the time it was the most hyped fight. Now that card has lost some steam, mainly because Pacquiao is beatable.

Pacquiao lost twice in 2012: first in a controversial split decision against Timothy Bradley, then by knockout via Juan Manuel Márquez.

That's not to say this wouldn't be a huge fight, though.

In 2012, before Pacquiao lost back-to-back bouts, a Yahoo writer said the matchup was expected to be the "largest-grossing fight in history" with total revenues reaching "$300 million" and pay-per-view sales as high as "$3 million." Again though, let's pump the brakes.

Bleacher Report reminds us, "This being boxing—and, specifically, Mayweather—sinkholes could still emerge if Floyd gets out of bed one day bent on going diva with a sudden list of new demands."

This most recent Yahoo report says the two will fight in MGM Grand in Las Vegas and have agreed to a 60-40 purse split, with the bigger portion going to Mayweather.