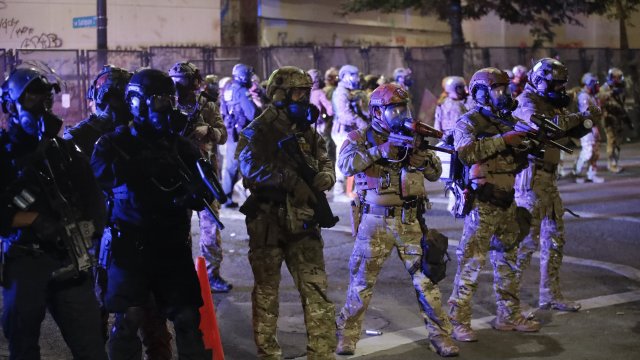 SMS
Mayors Ask Congress To Ban Federal Troop Deployments Without Consent
By Antoinette Miller
By Antoinette Miller
July 27, 2020
Mayors of cities including Portland and Seattle asked Congress for authority to bar federal law enforcement from being deployed to their cities.
SHOW TRANSCRIPT

As the president prepares to deploy federal agents across the country dealing with protests, six U.S. mayors are asking Congress to block the action.

On Monday, the mayors of Portland, Oregon; Seattle; Chicago; Kansas City, Missouri; Albuquerque, New Mexico; and Washington, D.C., wrote to members of the House and Senate to request the right to reject the deployment of federal agents to their cities.

Since the killing of George Floyd in May, cities across the U.S. have seen protests, sometimes violent, against racial injustice and police brutality.

The letter said: "We are outraged that the administration has responded to these First Amendment-protected gatherings by authorizing the deployment of riot-gear clad forces to Washington, D.C., Portland, Seattle and other communities across the country without the consent of local authorities." It said sending federal troops to cities against their wishes "should never happen."

Most recently, Portland, Oregon, has been the scene of violent protests involving clashes with federal law enforcement. U.S. authorities have used pepper spray, rubber bullets and force against demonstrators.

President Donald Trump has vowed to protect federal property by keeping agents on the ground and said that without them, those properties "wouldn't last a day."

Chicago Mayor Lori Lightfoot has publicly pushed back on the president's decision to send dozens of federal agents to the city. She said: "I've drawn a very hard line. We will not allow federal troops in our city. ... That's not happening here in Chicago."

The mayors said they'd also support bills requiring visible ID on federal authorities and their vehicles and limiting how those authorities can control crowds.