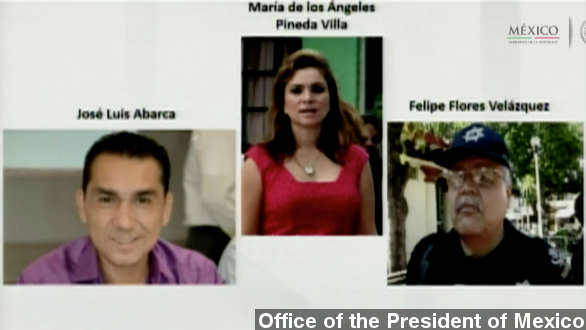 SMS
Mayor's Arrest Could Help Locate Mexico's Missing Students
By Christian Bryant
By Christian Bryant
November 4, 2014
Mexican police arrested the former Iguala Mayor and his wife early Tuesday. The two are believed to be behind the disappearance of 43 students.
SHOW TRANSCRIPT

Mexican officials said Tuesday they made a possible break in the case involving the disappearance of 43 college students after arresting a former Mexican mayor and his wife overnight.

Abarca and his wife have been on the run ever since being implicated in the Sept. 26 kidnapping. Mexico's attorney general Jesus Murillo Karam said late last month Villa was the link between the kidnapped students and their abductors — a Mexican gang. (Video via Office of the President of Mexico)

Mexican officials believe the mayor and his wife made several payments to the gang. They allege Abarca instructed the gang to take care of students who planned to protest a speech Villa was giving on the 26th. (Video via Euronews)

The arrests of Abarca and Villa come after an already long and exhaustive search, part of which involved officials finding dozens of buried bodies near Iguala only to later discover they didn't belong to the missing students. But CNN reports the recent arrests could still be key to finding them.

RAFAEL ROMO VIA CNN: "The mayor of Iguala and his wife are the probably masterminds of the abduction of 43 missing students. And so what Mexican officials are hoping is they will have details."

It's been nearly 40 days since the students disappeared. In that time, protests have spread across Mexico with demonstrators — including vigilante groups — putting pressure on the Mexican government to step up their search efforts. (Video via Fusion)

The President of the Mexican state of Guerrero, where the students were kidnapped, announced he was stepping down after the protests. (Video via Univision)

And the longer the search goes on, the more the reputation of Mexican President Enrique Peña Nieto suffers. A writer for The Guardian says, "The biggest problem facing Peña Nieto today is justifying his government’s failure to find the students ... Some argue that the authorities must know where they are ... but are protecting some person or institution deemed untouchable."

Meanwhile, the Los Angeles Times reports the protesters have no intentions of slowing down. A march of 43 organizations from Iguala to Mexico City began Monday — the group plans to reach the capital in a week.

Other details about the arrests of Abarca and Villa were not released other than authorities saying the two will be interrogated.