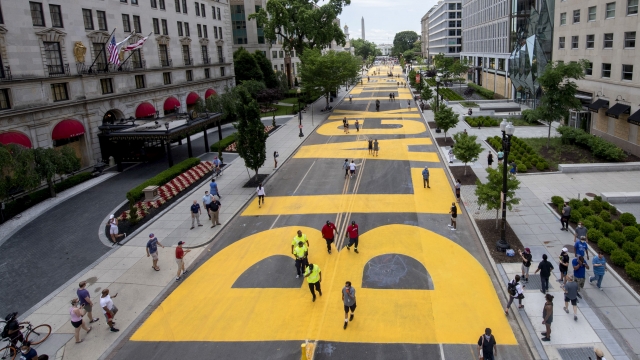 City workers and activists painted the words "Black Lives Matter" in big, bright yellow letters on 16th Street in Washington on Friday. The street leads straight to The White House.

This is the site where people have been demonstrating after the death of George Floyd in police custody. D.C. Mayor Muriel Bowser has officially renamed it "Black Lives Matter Plaza." She said she had Public Works Department employees paint the mural to honor peaceful protesters.

"There's a lot of anger. There's a lot of distrust of police and the government," Bowser said. "There are people who are craving to be heard and to be seen and to have their humanity recognized. And we had the opportunity to send that message loud and clear on a very important street in our city."

The end of the mural is near St. John's Episcopal Church, the place where President Donald Trump posed for a photo-op on Monday. U.S. Park Police and National Guard troops reportedly fired tear gas at peaceful protesters to let the president walk to the church.

Bowser has called for the removal of out-of-state National Guard troops. The president attacked Bowser on Twitter Friday, but didn't mention the mural.

He tweeted: "The incompetent Mayor of Washington, D.C., @MayorBowser, who's budget is totally out of control and is constantly coming back to us for 'handouts,' is now fighting with the National Guard, who saved her from great embarrassment over the last number of nights. If she doesn't treat these men and women well, then we'll bring in a different group of men and women!"

The local chapter of Black Lives Matter criticized Bowser's decision to paint the street. It said: "This is a performative distraction from real policy changes. Bowser has consistently been on the wrong side of [Black Lives Matter D.C.] history. This is to appease white liberals while ignoring our demands. Black Lives Matter means defund the police."