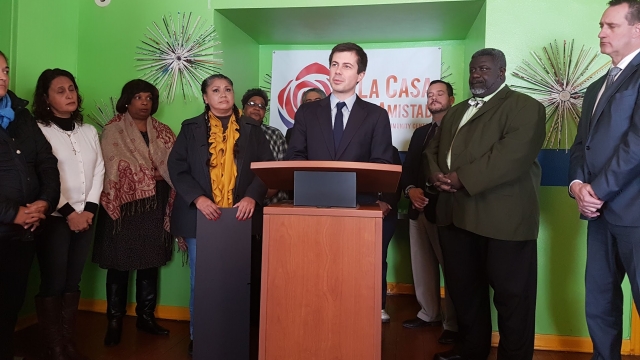 A pioneering yet controversial program is making its way across one of the nation’s reddest states. Its origin goes back to Pete Buttigieg.

“South Bend is back.” Beyond politics and sports. “Touch down!”

the city of South Bend, Indiana has something you may not expect, a booming Latino population, making up nearly 17% of the city, approximately 4500 of those are undocumented which led to one of the most innovative and controversial programs of Mayor Pete Buttigieg's time in office: the community resident card.

The ID allows residents to get a library card, set up utilities and perhaps most vitally -- help them see a doctor.

Unless it's an emergency, doctors have no obligation to treat a patient without proper ID. Some will. Some won’t.

“Church members on the west side of South Bend saw a need in the community. The folks here at La Casa de Amistad stepped up to fill the void.”

For the cards to have any clout, they would need some assistance from then-Mayor Pete Buttigieg.

“his office called and said our legal team has looked at this and if the city runs this program there could be some implications around open-door laws and some of the different things with the data around the program."

“The legal team came back and said well if a local organization ran a program like this and the mayor said the city would accept it would be almost as good as a municipal ID. “

So Mayor Buttigieg signed a proclamation requiring city municipalities like the police to accept it and urging local businesses to do the same.

“So this is where it all goes down.”

“We had a client come in. She said I need to get a South Bend ID card can you process my information today? Typically they’re by appointment we can try to work this out what’s going on? She said my id card expired I need to get a new one and I’m diabetic. I didn’t realize it. I went to a local clinic and they said go get it renewed. We’ll get your prescription but we need a valid form of ID. Because they wouldn’t see her without ID. Correct.”

But it seems the program is as much about health care as it is about erasing the shame of being undocumented. They’ve given out nearly 3,000 cards so far, many to US citizens hoping to show solidarity with the immigrant community.

Meanwhile, a conservative group is questioning the legality of the program and suing the city for more information.

“Whenever we see an issue where we think federal law may have been violated we look into it. We’re concerned in South Bend that unlawfully present aliens are receiving benefits that maybe they’re not required or authorized or allowed to receive under federal law.”

“This is not something that changes people’s status. It wasn’t designed to be political and it’s not political. People politicize these things.”

Buttigieg has been accused of shying away from the program. His campaign referred Newsy to previous statements he’s made praising the initiative in response to a request for comment.

Regardless of its critics, Community Resident cards are taking off in Indiana. Similar programs have already spread to Goshen and Plymouth with more cities on the way.