May The Fourth Be With You: A Guide To Star Wars Day 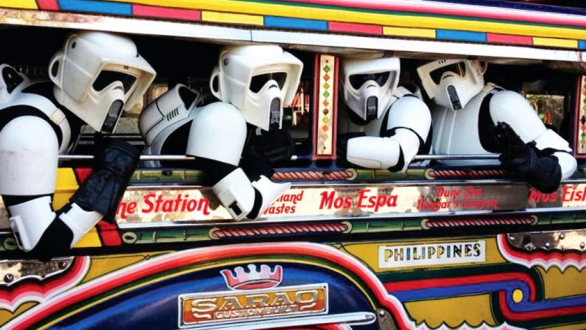 Yep. May fourth, as you've likely heard, is unofficial Star Wars day. That means droves of costumed jedi, storm troopers and ewoks will take to the streets to commemorate the beloved series.

But some of you may be wondering just how May the fourth came to be. Well, it all began "a long time ago in a galaxy far, far away..."

Ok, so not a galaxy far away — England; and not that long ago — 1979. Margaret Thatcher had just became the first woman Prime Minister in Britain's history, and an ad was placed in the London Evening News to congratulate her, reading: "May The Fourth Be With You, Maggie." (Via MTV)

The original Star Wars film had been released just two years earlier, but it was engrained in pop culture enough that the ad made sense, and the phrase stuck.

But the phrase and holiday didn't break out of dedicated Star Wars circles and hit critical mass until around 2011. Toronto Underground Cinema was one of the first to commemorated the day publicly with a costume contest and film festival.

Today, there are dozens of similar festivals all over world. Including this international gathering of the Star Wars fan club in Tunisia, which is where numerous scenes of the Skywalker's home planet, Tattooine, have been filmed over the years. (Via Los Angeles Times)

And this year May fourth may be more-so a cause for celebration than years past.

Mark Hamill, Harrison Ford and Carrie Fisher will return to reprise their original roles as Luke Skywalker, Han Solo and Princess Leia in the film that is expected to take place 30 years after the conclusion of the original trilogy.

Director J.J. Abrams says the will begin shooting in the next few weeks, and the movie is expected to open worldwide on December 18th, 2015. (Via Sky Movies)

Now, you probably know that project is being headed by Disney, who brought the rights to Star Wars in 2012. They got some pretty cool stuff in store for Star Wars on the May the fourth too.

Including events at Disney Land and Disney World like this, as well as promotions and limited edition items in their stores. (Via YouTube / MegaSoulhero)

The company also released the trailer for a new Star Wars mini-series set to air on the Disney channel beginning in the fall.

But Disney isn't the only one getting in on the fun. NASA is also getting their nerd on with this special May the fourth message from the International Space Station.

So, whether you grab your light saber and do you best Obi-Wan impression, or just chill out and binge-watch the entire saga Sunday, be wary of the revenge of the fifth. A.K.A. Monday.