What's Next For U.K. Prime Minister Theresa May? 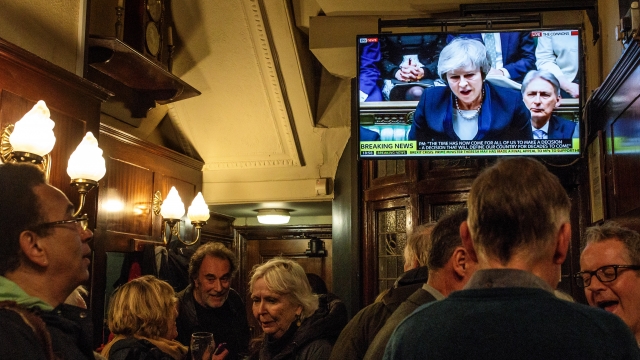 After watching her Brexit deal get shredded in Parliament, U.K. Prime Minister Theresa May now has to find a way to pick up the pieces and carry on.

May's Brexit deal suffered the largest margin of defeat in modern Parliamentary history. Just 202 members of Parliament supported May's deal, while 432 members voted against it. 118 members of May's own party rejected her deal.

The immediate next step for May is staying in power: opposition leader Jeremy Corbyn brought up a no confidence motion to unseat May immediately after the vote. That motion isn't expected to succeed; May's government still has support from a majority of Parliament, even if her Brexit deal doesn't.

Thanks to an earlier motion, the government is now also compelled to return an alternative Brexit deal to Parliament within three days time. But whatever May comes up with in that time is unlikely to be much different than the current deal.

After that is anyone's guess: May says her government's next move is to try and build consensus within Parliament for an altered deal. But the European Union has ruled out any renegotiations — a new deal can't move forward without the bloc's approval.

After the vote, European Commission President Jean-Claude Juncker warned the U.K. that "time is almost up" to strike a withdrawal deal — the deadline to avoid a chaotic no-deal Brexit is March 29.

It's possible the looming deadline might pressure some members of Parliament to back May's deal rather than risk a hard Brexit. But the huge margin of defeat May suffered makes it seem all but impossible for her to win enough support to salvage the current deal.