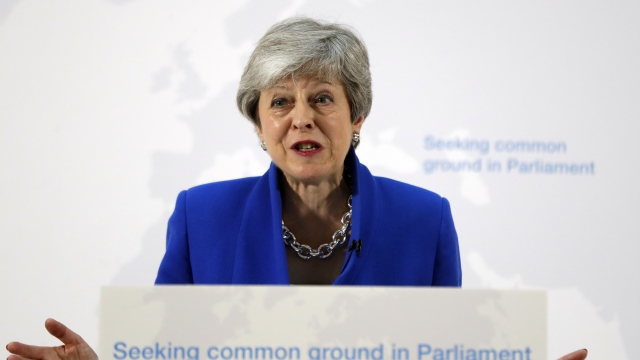 SMS
Theresa May Offers 2nd Brexit Referendum If Lawmakers Approve Her Deal
By Ahmed Jawadi
By Ahmed Jawadi
May 21, 2019
British PM Theresa ​May announced new incentives for Parliament to approve her Brexit deal, ​and another public vote is on the table.
SHOW TRANSCRIPT

British Prime Minister Theresa May has offered lawmakers a chance to hold a second Brexit referendum if they approve her withdrawal agreement.

May announced new incentives on Tuesday in an effort to gain more support for her thrice-rejected Brexit deal, including letting Parliament decide whether to hold another public vote, with a promise to honor the outcome. The "new plan" also includes a new workers' rights bill, a vote on different customs options and a commitment to find an alternative to the Northern Ireland backstop by 2020. If the backstop does come into force, May's bill would "ensure that the [U.K.] will stay aligned with Northern Ireland."

The prime minister didn't mince words about her new proposal, saying if Parliament failed to pass the deal, it would lead to a "nightmare future of permanently polarized politics."

"And only by voting for the withdrawal agreement bill at second reading can MPs provide the vehicle Parliament needs to determine how we leave the EU," May said. "So if MPs vote against the second reading of this bill, they are voting to stop Brexit."

Despite May's plea for members of Parliament to support her deal, opposition leaders and her own party members alike were quick to express their disapproval. Labour leader Jeremy Corbyn said his party would not support the bill, as "it's basically a rehash of what was discussed before." Several Tories also said they won't vote for the bill, with many of them taking issue with the possibility of a second referendum.

Parliament is set to vote on May's deal in the first week of June.