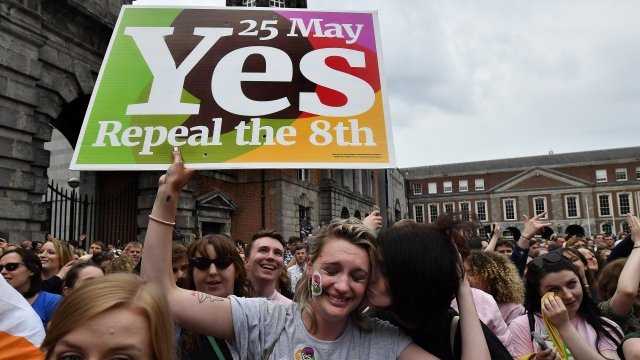 Northern Ireland only allows abortion if a pregnant person's life or health is at risk.

As soon as Ireland voted to overturn its abortion ban, politicians in the United Kingdom looked toward Northern Ireland and its abortion laws.

Northern Ireland is part of the U.K. and has the country's most restrictive abortion rules; abortions are only legal if the life or mental health of a pregnant person is at risk.

Many of the U.K.'s Parliament members want those laws to change. The Sunday Times reports over 130 lawmakers — including members of Prime Minister Theresa May's own party — are willing to back an amendment to a domestic violence bill that would liberalize Northern Ireland's abortion laws.

But May has said she's unwilling to make changes to the abortion laws. Instead, she says, that decision should be up to Northern Ireland's government.

There's a problem, though: Northern Ireland hasn't had a London-sanctioned government since January 2017, when a power-sharing deal collapsed. Since then, lawmakers in London have been making major decisions for the region.

That means the U.K. Parliament could technically make the abortion rule change. But May needs the support of the socially conservative Democratic Unionist Party — the largest party in Northern Ireland — to stay in power herself, and they strongly oppose changes to the law.

Even without changes to Northern Ireland's abortion laws, some politicians there are concerned about Ireland's vote. One Democratic Unionist Party politician told the BBC he felt it was "inevitable" that abortion clinics would be set up in border towns in Ireland targeting women from Northern Ireland.

Ireland's prime minister says new abortion laws will be in place by the end of the year. The government has proposed giving pregnant people unrestricted access to abortions during the first 12 weeks of pregnancy and allowing later abortions in certain circumstances.