May Day Sparks Protests Across The Globe 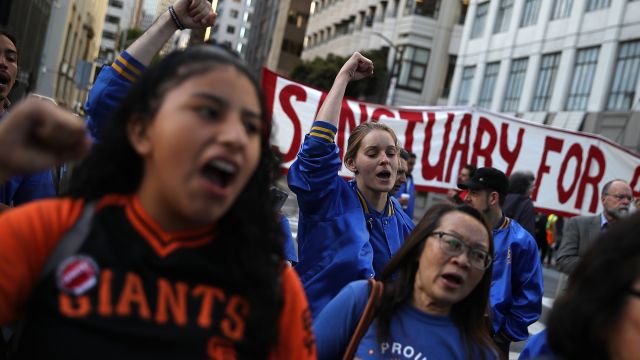 SMS
May Day Sparks Protests Across The Globe
By Katherine Biek
By Katherine Biek
May 1, 2017
May 1 is International Workers' Day, but people in the U.S. marched for a variety of issues, including LGBTQ rights and immigration reform.
SHOW TRANSCRIPT

Hundreds of thousands of people are marching and protesting across the country Monday.

May 1 is known as May Day. It's also known as International Workers' Day. But demonstrators this year are standing up for a variety of issues, including LGBTQ rights, immigration reform and changes in police conduct.

The first May Day protest was May 1, 1886, when U.S. workers went on strike in support of an eight-hour workday. But the protests turned deadly in Haymarket Square in Chicago.

International Workers' Day was heavily endorsed by socialist and communist parties, so in 1921, it became known as Americanization Day in the U.S. Then in 1955, during the Cold War, Congress and President Dwight D. Eisenhower renamed it Loyalty Day.

The purpose of Loyalty Day is to recognize "the heritage of American freedom," and each year since 1958, the president has issued a Loyalty Day proclamation.

In this year's proclamation, President Donald Trump asked Americans to not only express loyalty to "individual liberties," but also to a "limited government."

International Workers' Day protests took place this year around the world, including in Paris, where demonstrations turned violent amid France's divisive presidential election.