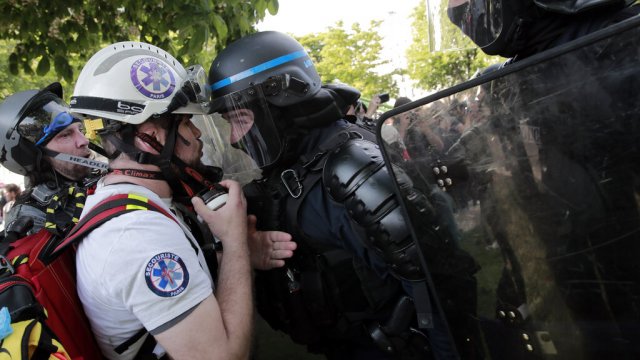 Tens of thousands of people marched Sunday in cities around Europe for May Day protests to honor workers and shame governments into doing more for their citizens. In France, protesters shouted slogans against newly elected President Emmanuel Macron, a development that may set the tone for his second term.

Tensions erupted in Paris, as some demonstrators smashed windows at some banks, a fast-food restaurant and a real estate agency, apparently partially the work of masked men dressed in black. French police moved in, firing rounds of tear gas. That failed to stop a woman from attacking a firefighter trying to douse a street fire.

Interior Minister Gerald Darmanin said 45 people had been detained so far, including the young woman. Eight police officers were injured, he said, calling the perpetrators of the violence "thugs" who were trying "to stop the right to demonstrate."

May Day is often a time of high emotions for workers in Europe, and protests in the last two years have been limited by pandemic restrictions.

Turkish police moved in quickly in Istanbul to encircle protesters near the barred-off Taksim Square — where 34 people were killed In 1977 during a May Day event.

On Sunday, Turkish police detained 164 people for demonstrating without permits and resisting police at the square, the Istanbul governor's office said. On the Asian side of sprawling Istanbul, a May Day union-organized gathering drew thousands who sang, chanted and waved banners.

Berlin Mayor Franziska Giffey briefly interrupted her May Day speech at a trade union rally where someone threw an egg at her but missed. Giffey, of the center-left Social Democrats, was met by loud protests during her speech. Giffey called the egg tossing "neither helpful nor politically valuable."

In Italy, after a two-year pandemic lull, an outdoor mega-concert was being held in Rome after rallies and protests in cities across the country. Besides improving conditions for workers, peace was an underlying theme, with many calls for an end to Russia's war in Ukraine. Italy's three main labor unions held their main rally in the hilltop town of Assisi, a frequent destination for peace protests.

"It's a May Day of social and civil commitment for peace and labor," said the head of Italy's CISL union, Daniela Fumarola.

In Russia, a motorcade organized by the country's trade unions supportive of the invasion of Ukraine finished its cross-country trip in Moscow Sunday to mark May Day. Participating were 70 cars representing all Russian regions from Vladivostok to Astrakhan, as well as the Russia-backed separatist administrations controlling parts of Ukraine's Donetsk and Luhansk regions.

May Day celebrations in Russia also saw the arrests of antiwar protesters and bystanders across the country, including some who demonstrated in support of the authorities. According to reports by the Russian legal aid group OVD-Info, which tracks political arrests, a man was detained in Moscow after holding up a sign in support of the FSB and President Vladimir Putin.

Rising inflation and fears of upcoming food shortages from the war in Ukraine were feeding discontent around the world.

Thousands of workers, unemployed people and retirees marched peacefully in North Macedonia's capital of Skopje, demanding wage increases and respect for workers' rights. Inflation, running at an annual clip of 8.8% in March, is at a 14-year-high.

Darko Dimovski, head of the country's Federation of Trade Unions, told the crowd that workers are demanding an across-the-board wage increase.

"The economic crisis has eaten up workers salaries," he said.

In France, the May Day rallies — which came a week after the country's presidential election — aimed to show the centrist Macron the opposition that he could face in his second five-year term. Opposition parties, notably from the far-left and the far-right, are looking to break his government's majority in France's parliamentary election in June.

The Paris march was dominated by far-left leader Jean-Luc Melenchon, who placed third in the first round of the presidential vote and is deep in talks with other leftist parties in France, including the once-dominant Socialists who are struggling to exist. Melenchon appealed to potential partners to ally to keep Macron's centrists from dominating parliament as they do now.

"Our goal is victory," he said.

Some 250 marches and protests were being held around France. All were pressing Macron for policies that put people first and condemning his plan to raise France's retirement age from 62 to 65. Macron says that's the only way the government can continue to provide good retirement benefits.

"May Day is the time to rally for a reduction in working time. That reduction signifies one key thing — that workers should be getting a larger share of the wealth," Melenchon said, condemning the violence at the Paris march, which he said overshadows the concerns of workers.

In a first, French far-right leader Marine Le Pen was absent from her party's traditional wreath-laying at the foot of a statue of Joan of Arc, replaced by the interim president of her National Rally party. Le Pen was defeated by Macron in the April 24 presidential runoff, and plans to campaign to keep her seat as a lawmaker.

"I've come to tell the French that the voting isn't over. There is a third round, the legislative elections," said National Rally's Jordan Bardella. "It would be unbelievable to leave full power to Emmanuel Macron."