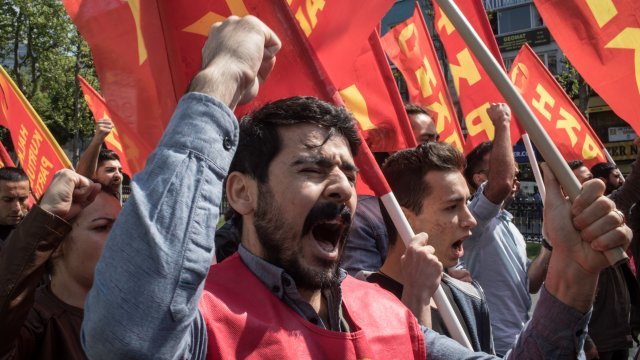 SMS
Thousands Worldwide Protest, Celebrate Workers' Rights On May Day
By Audrey Esther
By Audrey Esther
May 1, 2018
From Paris to Havana, Cuba, people around the world raised awareness about workers' rights by commemorating May Day.
SHOW TRANSCRIPT

Since the 1800s, on May 1, or May Day, people around the world have raised awareness about workers' rights — primarily by either celebrating or protesting. It's also known as International Workers' Day.

This year in Paris, May Day protests turned violent. Police say about 1,200 people marched in the city's streets and someone threw a Molotov cocktail at a McDonald's.

In Jakarta, Indonesians rallied for a variety of reasons, including for higher wages.

More than 11,000 miles east, Cubans celebrated May Day with a parade in Havana led by the country's new president, Miguel Díaz-Canel.

North of there, and from Miami to Los Angeles, protests focused also on immigration and immigrant rights.