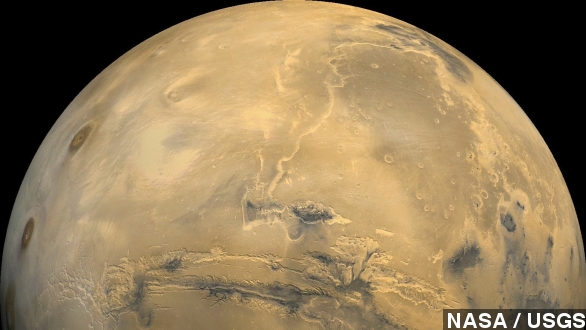 SMS
MAVEN Spots Unexplained Dust In The Martian Atmosphere
By Evan Thomas
By Evan Thomas
March 19, 2015
NASA's MAVEN has been watching a cloud of dust since it arrived in orbit last year. Scientists don’t know exactly where it came from.
SHOW TRANSCRIPT

Unexplained dust, anyway. Researchers have detected a cloud of dust floating between 93 and 190 miles high in the Martian atmosphere, using sensors aboard the Mars Atmosphere and Volatile Evolution spacecraft, or MAVEN.

The dust has been there since MAVEN arrived in orbit in September of last year, and scientists aren’t sure where it came from. (Video via NASA)

It could have been kicked up from the surface, obviously, or it could have come from the martian moons Phobos or Deimos, or from passing comets.

We’ve seen comets make close flybys before: Siding Spring made it within 87,000 miles of Mars last year. That comet itself couldn’t have caused the dust, though since the cloud was present in the atmosphere before its pass. (Video via NASA Jet Propulsion Laboratory)

Scientists are considering external dust delivery because they don’t know of any processes on Mars itself that would trigger a dust cloud in that location.

"If the dust originates from the atmosphere, this suggests we are missing some fundamental process in the Martian atmosphere," researcher Laila Andersson said.

If an unexplained cloud of dust isn’t intriguing enough, MAVEN has also detected ultraviolet aurora in Mars’ atmosphere, as it interacts with charged particles in the solar wind.

They’re spread out across the whole Northern Hemisphere, instead of focusing themselves around specific magnetic features the way those on Earth do. (Video via NASA)

That could be because Mars doesn’t have a strong magnetic field like Earth does, meaning electrons from the solar wind hit the atmosphere itself. (Video via NASA)

While these findings might be unexplained for now, they’re part of what MAVEN was designed to do: the satellite is part of the Mars Exploration Program, which, between three orbiters and two rovers, is designed to survey and explain the climate on Mars.

And MAVEN will have time to keep searching for answers: its primary mission is expected to last for another eight months.

This video includes images from NASA / ESA and the University of Colorado and music from the United States Air Force Band.