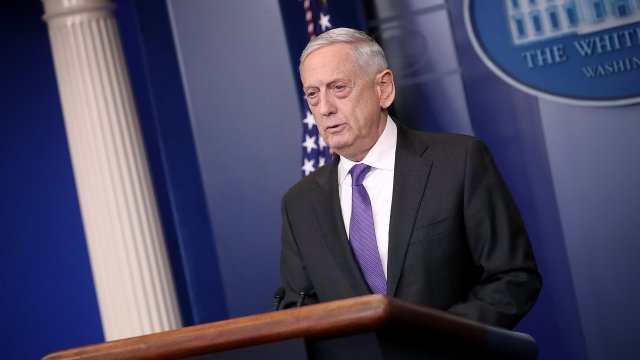 SMS
Mattis Says Some Taliban Factions Might Be Interested In Peace Talks
By Lindsey Pulse
By Lindsey Pulse
March 13, 2018
Defense Secretary Jim Mattis told reporters he thinks political reconciliation between the Taliban and Afghan government might be possible.
SHOW TRANSCRIPT

Defense Secretary Jim Mattis made an unannounced visit to Afghanistan.

Mattis visited Kabul on Tuesday. He told reporters some factions of the Taliban have expressed interest in reconciling with the Afghan government.

"All wars come to an end," Mattis said. "You don't want to miss an opportunity because you weren't alert to the opportunity."

Mattis said we shouldn't expect peace moves from the Taliban en masse, but that some might be open to talks.

The secretary's visit comes shortly after the Afghan government said it would be willing to recognize the Taliban as a legitimate political party as part of a ceasefire with the militant group.