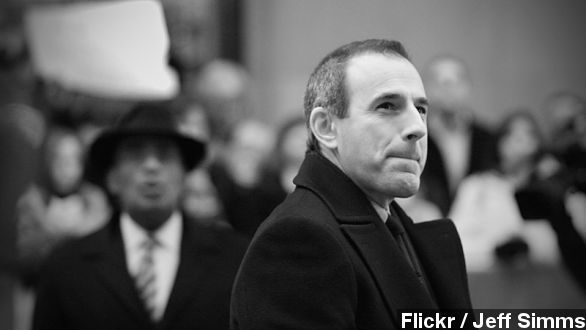 The New York Times broke the story — NBC has extended the 56-year-old host's contract for an unspecified number of years. It's through at least 2017. In a statement, Lauer said:

"I consider this the best job in broadcasting. ... I love [the] people I work with every day and I have such respect and gratitude for the people I work for. I couldn't be happier to be staying."

Lauer posted something similar in a recent Facebook chat, telling a fan, "I have always said this is the greatest job in broadcasting."

And according to a TVNewser source, the NBC News team is "thrilled" Lauer has re-upped.

Still, the renewal surprised some outlets — speculation was Lauer would leave the show at the end of his previous deal.

And a lot of blame for that fall fell on Lauer — it all went down after NBC ousted Ann Curry from the program in June 2012. Many saw her exit as orchestrated by Lauer. That rumor wasn't helped by his smiling throughout her tearful goodbye.

After Curry's exit and Savannah Guthrie's introduction as co-host, "Good Morning America" clinched the ratings win and has held strong ever since. (Via U.S. Navy, Flickr / Governor Neil Abercrombie)

Meanwhile, Lauer's Q Score — a likability rating of TV personalities — plummeted. TheWrap says before the Curry drama, Lauer had a very high score over 20. Now, he's at a seven. "GMA"'s Robin Roberts has a 29.

Still, The Hollywood Reporter notes "Today" has recently seen an uptick in ratings — the Sochi Olympic Games are partly to thank — but the show remains firmly in second place.

Those ratings could get another bump if the rumors are true that Lauer's former partner-in-crime, Katie Couric, is returning to "Today" to cover for Savannah Guthrie's maternity leave later this year.

And with nearly two decades at one of TV's most-coveted jobs, Lauer is reportedly raking in some major cash. TMZ reports the host's last contract might have paid him as much as $30 million and suspects the renewal came with a raise.