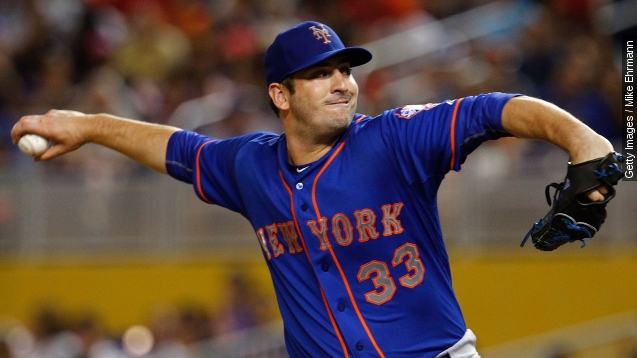 SMS
Matt Harvey And The Mets Have A Lot Of Questions To Answer
By Matt Moreno
By Matt Moreno
September 7, 2015
Mets pitcher Matt Harvey said he'll pitch in the (potential) playoffs despite his 180-innings limit recommended by a doctor this season.
SHOW TRANSCRIPT

For being in first place in the National League East, things could be going a lot more smoothly for the New York Mets. Mainly because the team's ace pitcher, Matt Harvey, could be cutting his season short.

After giving reporters noncommittal answers all weekend, Harvey announced Sunday via The Players' Tribune that he will pitch in the playoffs — if the Mets make it to the postseason, which they haven't done since 2006.

Harvey wrote, in part: "I understand the risks. I am also fully aware of the opportunity the Mets have this postseason. Winning the division and getting to the playoffs is our goal. Once we are there, I will be there."

Harvey's agent, Scott Boras, has said his client is on a 180-inning limit this season due to a doctor's suggestion. Harvey is a year removed from Tommy John surgery that wiped out his entire 2015 campaign.

It's sparked opinions from both sides of the topic, with some defending Harvey over the attempt to prolong his career. More have been quick to slam his decision, though, feeling he's letting the team down.

Part of the problem with this 180-inning ceiling is, from the sound of it, this is the first time it was brought up to the Mets, and Harvey is already at 166 1/3 innings, meaning he's got maybe two more starts left in the regular season.

But will the Mets be in the playoffs? They still have to shut the door on the Washington Nationals, who sit right behind them in the division.

And why 180 innings? A Grantland writer suggests pitches, not innings, should be what doctors, players, teams and others should be worried about.

Nationals pitcher Stephen Strasburg went through a similarly poorly timed innings cap in 2012, and the results are still inconclusive. He pitched 183 innings in 2013 and 215 innings in 2014, both with ERAs in the low 3.00 range and more than 190 strikeouts.

But he's struggled mightily this year, recording just over 90 innings so far and an ERA well over 4.00.

One thing that is conclusive, though, is the Nationals haven't won a playoff series since shutting Strasburg down that year. They're 0-2 in postseason series since.

Harvey is still slated to start Tuesday's game against the Nationals. What will happen after that is anyone's guess.