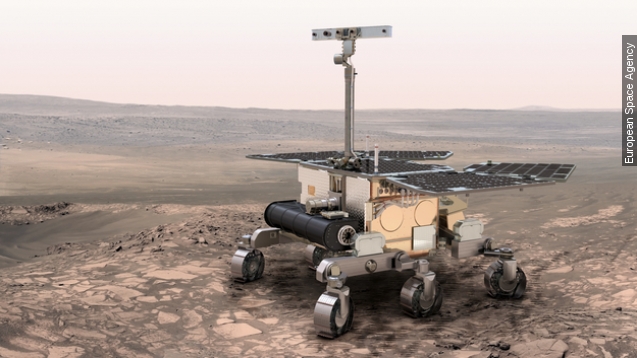 SMS
Matt Damon, Rejoice! Water-Extracting Device Headed To Mars In 2018
By Grant Suneson
By Grant Suneson
December 10, 2015
The European Space Agency will bring a device to Mars that can supposedly harvest moisture from under the planet's surface.
SHOW TRANSCRIPT

Thanks to some Swedish scientists, there's a new device that will head to Mars that would've made Matt Damon's life a lot easier.

"So I've got to make water and grow food on a planet where nothing grows," Damon's character says in "The Martian."

Researchers at Luleå University of Technology built a machine they say is capable of farming moisture from under Mars' surface. (Video via European Space Agency)

We just found out about the moisture in April thanks to NASA's Curiosity rover, and scientists are eager to access it because of what it could mean for manned expeditions to Mars. (Video via NASA)

The device is called HABIT, and while we don't know what it looks like just yet, we do know it's going to tag along with a lander and a rover that the European Space Agency is sending to the red planet in 2018.

HABIT can't absorb much water, just 5 milliliters a day. But if the design works, it can easily be made larger to take in more liquid water each night on future missions. (Video via European Space Agency)

And scientists are optimistic the breakthrough could bring us one step closer to stepping foot on another planet.

Researcher Javier Martin-Torres told New Scientist, "We will produce Martian liquid water on Mars, that could be used in the future exploration of Mars for astronauts and greenhouses."

"In your face, Neil Armstrong," as Damon's character says in the film.