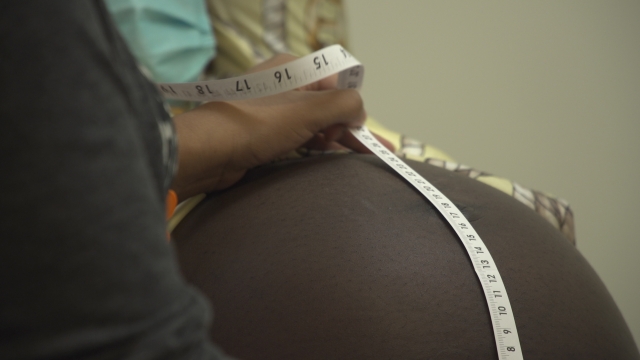 SMS
Maternal Health Advocates Welcome Virtual Care
By Lauren Knapp
By Lauren Knapp
May 7, 2020
The Public Health Emergency has led to a massive, but temporary, expansion in telehealth care - something OBGYNs are welcoming.
SHOW TRANSCRIPT

My last in-person prenatal visit was March 16. Only symptomatic patients were wearing masks and we were all getting used to eyeballing a 6 foot distance.

Since then, I’ve taken my own vitals and had two visits over Zoom.

So my doctor sent me this blood pressure cuff - and once a week I take my blood pressure at home and I enter it into an app on my phone along with my weight.

It’s all to protect against the spread of the coronavirus.

But, maternal health advocates are hoping that telehealth care remains an option long after the pandemic is over.

Dr. Rao said "we have kind of been forced to switch over to providing as much care as we possibly can virtually. And in some ways, that has been a blessing in disguise."

The switch has expanded access to the clinic’s many low-resource and uninsured patients- who have a hard time taking off work, arranging childcare or even getting to the clinic.

Dr. Rao said "Even though the clinic may only be within a few miles of their house, it could still take over one or two hours for them to get from one place to the other."

At Mary’s Center, and across the country, telehealth is more than a check-in over Zoom. It also includes remote monitoring - which can be especially helpful for patients with diabetes and hypertension.

Dr. Rao said, "Many of our patients have been able to obtain some basic medical supplies including a thermometer, a blood pressure cuff, a scale."

About a week after giving birth to her son Khyza in March, Evans’ doctor gave her a call.

For the past several decades, maternal mortality and morbidity rates have been trending in the wrong direction. Advocates say regular access to care is a big factor.

Dr. Joia Crear-Perry said, "We have gaps in the United States - areas where there's not an opportunity for  a person to deliver a baby. So there's not an obstetrician or a midwife in that area."

One solution, according to Maternal health advocates like Dr. Crear-Perry, The American College of Obstetricians and Gynecologists and March of Dimes: Telehealth.

But there are roadblocks: HIPAA-compliant portals are expensive and Medicaid reimbursement rates for telehealth vary widely by state.

For example, while Medicaid funds nearly half of all births, only 19 state programs reimburse for telemedicine if the patient is at their home - and only six states specifically mention pregnancy in their reimbursement laws.

But all that changed when the President declared a National Emergency in March.

Dr. Crear-Perry said, "So this is an opportunity to really think broadly about, okay, we created this system is failing people and how do we birthing people and then how do we re-imagine? Like, how many visits do we need? What do we need for a healthy person? And we would have never stopped to do this if there weren't this crisis."

On March 17, the Trump administration announced a massive, albeit temporary, expansion of telehealth care allowing communication technologies that were previously blocked due to HIPAA concerns and letting states apply for waivers to make temporary changes to their Medicaid programs.

Dr. Crear-Perry said, "It's amazing how we've been fighting for that for a long time and magically CMS could do it with one little draft of a pen during this crisis."

Additionally, several private insurers have all announced an expansion of telehealth coverage through at least the end of May.

But there are some blindspots. For instance, rural and low-resource patients might not have reliable access to the internet.

And while almost every state’s Medicaid program is temporarily allowing for prenatal phone consultations - it’s unclear if that will be an option after the public health emergency ends.

Still, Dr. Rao says she’s been happy to see just how much care they can offer remotely before and after delivery.

Dr. Rao said, "I've noticed for a lot of our postpartum patients, it is even more beneficial because you can imagine you have this newborn who's eating every couple hours, being able to just pick up your phone and have your visit right there in your bedroom is extremely convenient."

After being diagnosed with postpartum depression, Elite Evans added therapy to her virtual care.

HHS says the expansion will last for the duration of the public health emergency.

But many providers hope virtual visits will remain a standard option for maternal health care.