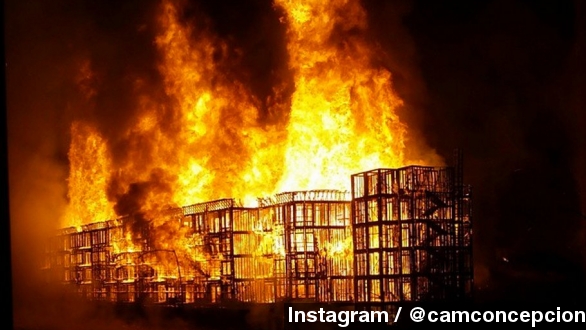 Around 250 firefighters were called to help battle a blaze that destroyed an under-construction apartment tower and damaged two other buildings in Los Angeles Monday morning.

"Avoid it if you're coming through this part of the city. ...  It continues to burn, although they are making progress. Again, what they're doing here is taking that defensive posture. They're surrounding the fire, putting as much water and foam on it, cooling that building off," an anchor for KTTV reports.

People were quick to post to social media, this user calling it a "war zone," and another saying they could see the flames above the city from a mile away. Here's how local KTLA described it.

"A lot of chaos, a lot of people trying to battle this blaze here. ... We're told that the bottom portion was concrete, but then the next five stories was all wood frame, just making this like an absolute matchstick up in flames."

The Los Angeles Fire Department later asked the media on the ground to stay away from the area due to "falling shards of glass," noting helicopter cameras would be the best.

The LAFD's public information officer called it a "historic" and "career" fire for those working to put out the flames. (Video via KCBS)

There's so far been no official cause for the fire and no reported injuries.