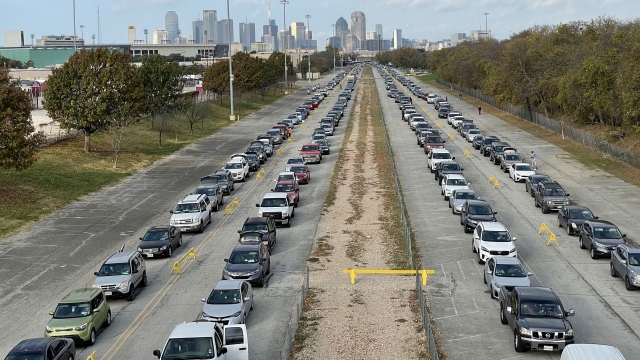 This was the scene in Dallas recently as regional food banks and other community groups distributed Thanksgiving food supplies to 25,000 families in a single day. And this was the traffic jam of people in need, lining up for help.

In the time of COVID-19, this isn't just a story of holiday giving and good will. Liana Solis of the North Texas Food Bank says its about surging economic displacement and distress during the pandemic.

"Yes, the lines that we're seeing are heart-breaking. I mean, it's amazing just to see the amount of people that need help. And that's all over the nation. That's not just in Dallas," said Solis.

Indeed, this is now a routine scene in communities near Detroit. Here the aid group Forgotten Harvest says many regional jobs lost to the pandemic haven't returned and families need food support to avoid going hungry.

"It's like lines, they're like two miles long. And this is becoming a weekly occurrence," said Forgotten Harvest's CEO, Kirk Mayes.

Since March alone, the North Texas Food Bank has distributed nearly 75 million pounds of food to more than 100,000 families, with demand spiking by 50 percent or more during the pandemic.

Much of the provisions being distributed, including at this food line in South Florida, are being paid for through the federal Cares Act. It allocated $200 million for emergency food and shelter during the pandemic. But funding ends next month and regional food banks are worried.

But the procession of people needing help may not.

Said Solis of the North Texas Food Bank: "This is something that no one could have expected, no one saw coming. And so, once we saw people that were losing their jobs, that were losing childcare or that were just losing resources they needed to survive, it really started the need to reach out for help. So we're not only serving people that already need food assistance but people who have never needed food assistance in their life."