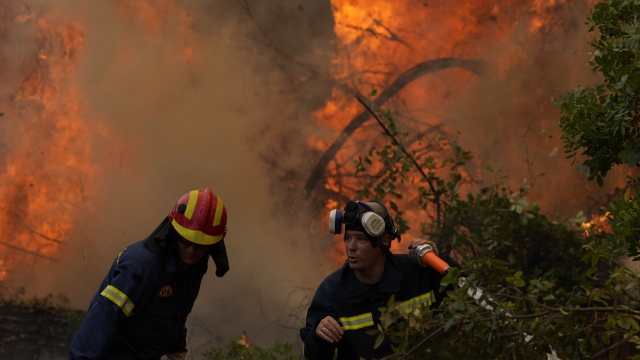 Firefighters and residents battled a massive forest fire on Greece’s second largest island for a seventh day Monday, fighting to save what they can from flames that have decimated vast tracts of pristine forest, destroyed homes and businesses and sent thousands fleeing.

The smoke and ash from the fire on Evia, a rugged island of forests and coves almost touching the Greek mainland, blocked out the sun, turning the sky orange as the blaze rampaged across the northern part of the island.

The fire, which began Aug. 3, is the most severe of dozens that have broken out across Greece in the past week, after the country was baked by its worst heat wave in three decades which sent temperatures soaring over 110 degrees for days.

Other big fires have been burning forests and farmland in the southern Greek region of the Peloponnese, while a major blaze that encroached into the northern suburbs of Athens and Mount Parnitha national park on the fringes of the capital was on the wane. Firefighting efforts continued in Parnitha, where French, Israeli and Cypriot firefighters were helping their Greek colleagues. 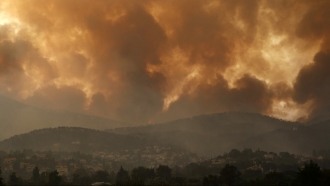 The wildfires have stretched Greece’s firefighting capabilities to the limit, and the government has appealed for help from abroad. More than 20 countries in Europe and the Middle East have responded, sending planes, helicopters, vehicles and manpower.

Despite the help, many residents and local officials have complained of a lack of firefighters, and some have taken to calling in to Greek television networks to appeal for help, particularly from water-dropping planes and helicopters.

Greek authorities, scarred by a deadly wildfire in 2018 near Athens that killed more than 100 people, have emphasized saving lives in their firefighting efforts, sending dozens of evacuation orders for inhabited areas and using ships to get people from coastal areas when necessary.

The coast guard said a total of 2,770 people had been evacuated by sea from fires across the country between July 31 and Aug. 8.