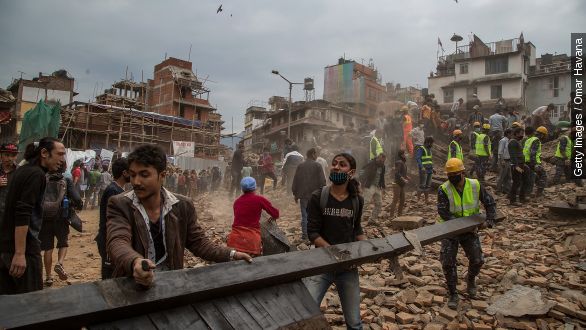 The scenes out of Nepal are devastating. A powerful earthquake has left at least 1,100 dead, a number that's nearly doubled from earlier reports and which is expected to rise.

The tremors could be felt across the region, as far away as neighboring India. The quake’s epicenter, which the U.S. Geological Survey said measured 7.8 on the Richter scale, struck about 50 miles from the heavily populated capital city of Kathmandu just before noon local time Saturday. Smaller aftershocks reportedly continued for hours. (Video via YouTube / Shaniya Pathak)

Centuries-old buildings were left in ruins.

It’s still too early to know the full extent of the damage in Nepal, already one of the world’s poorest countries.

Home to Mt. Everest, Nepal relies heavily on tourism, which accounts for nearly 3 percent of the country’s GDP.

The earthquake reportedly caused an avalanche on the mountain, injuring dozens and sending one mountaineer running for his life.

Others weren't so lucky. According to USA Today, at least 10 people on the mountain were killed. It's unknown just how many were injured or are currently missing.

Many camps were destroyed — leaving many in need of immediate care, according to one sherpa, who wrote on his Facebook page. “All the doctors here are doing our best to treat and save lives.”

Saturday’s earthquake was the worst in over 80 years. A quake along the India-Nepal border in 1934 killed over 10,000 people.

This video includes an image from Getty Images and Twitter / @ricardo_otake.