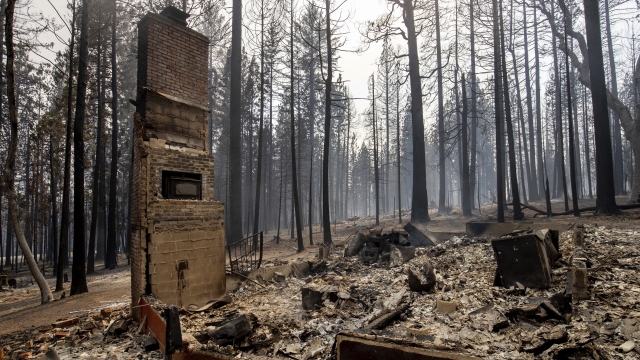 California's massive Dixie Fire is still burning more than a month after it ignited. On Tuesday, the fire burned more than 48,000 acres.

The fire was driven by red flag wind gusts of up to 40 mph. Firefighters only have it 30 percent contained.

The Northern California blaze is the largest wildfire in the United States. It is one of 104 fires burning, most of which are in the western part of the country.

Nearby, the Caldor fire raged out of control on Tuesday. It burned through the small town of Grizzly Flats, destroying almost every structure.

"By last night, we were watching orange and gray skies and watching our town burn to the ground," said Derek Shaves, Grizzly Flats resident.

The fire burned houses, cars and destroyed the town's church.

Grizzly Flats resident Derek Shaves fled his home with just a few of his belongings.

A few buildings and homes in the town survived but most residents accept that their homes were likely destroyed.

Wildfires have burned 4.3 million acres so far this year.

The U.S. Forestry Department announced it is operating in "crisis mode."

There are 25,000 firefighters and emergency responders deployed to battle the blazes, which is double the number at the same time last year.