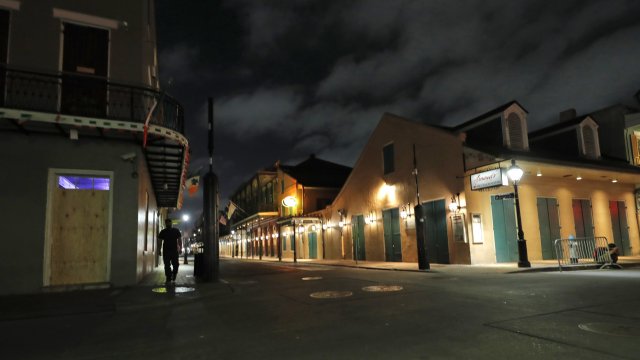 One month ago, Mardi Gras revelry in New Orleans spread from Bourbon Street to neighborhood streets. Now they're all largely empty.

And medical officials say Mardi Gras, and its thousand of visitors through Feb. 27, provided a vast incubator for the coronavirus. Louisiana Gov. John Bel Edwards says infections in his state may be spiking faster than anywhere in the world.

More than 110 people have died from the disease in Louisiana, with more than 80 on Thursday alone, The state has more than 2,300 cases, reported in more than 80% of the state's 64 parishes. Two New Orleans parishes rank among the top seven U.S. counties in rates of infections.

Coronavirus surges are also being reported in northern states of Michigan and Illinois. Michigan's more than 2,800 cases have jumped almost ten-fold in 8 days, with Thursday's deaths including a Detroit police officer, Jonathan Parnell.

Chicago's Rush University Medical Center was adding additional coronavirus beds in its lobby, planning for a major influx in patients. Chicago Mayor Lori Lightfoot said there could be tens of thousands of hospitalizations across the city in ensuing weeks.

In New Orleans, the coronavirus has infected more than 60 medical workers in Ocshner Health system facilities, requiring another 300 employees to be quarantined.

Gov. Edwards warns the state could run out of ventilators for critically ill patients by next week. After the state's great party, he now pleads with residents to stay home. "No one should look at this situation," he said Thursday, "and think, 'This doesn't involve me.'"