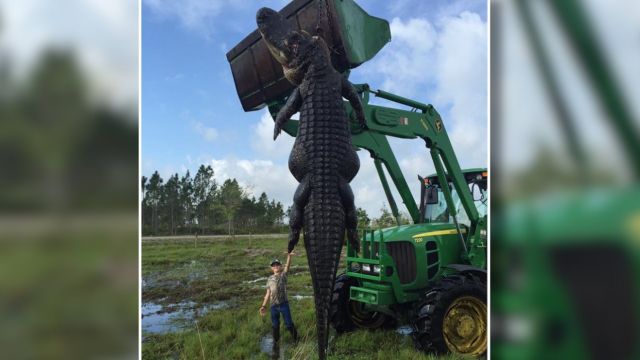 The alligator was captured at a farm in Okeechobee, Florida. Whether or not it's a state record is still pending.

This cattle-eating alligator was way too big for this small Florida town. About 15 feet too big, to be exact.

The massive gator was caught and killed at a farm in Okeechobee, Florida — a town of 5,500 people.

Professional hunter Lee Lightsey told the BBC: "Although this animal is huge, I was not that surprised it existed. ... But what really drew our attention to this animal was the fact that it seems to have been feasting on the cattle on my farm."

Lightsey said when he and his hunting guide saw the alligator surface from the cattle pond, they shot it. They needed a tractor to move the nearly 800-pound gator from the pond.

And, as Newsy's partners at WPTV report, this could be a Florida record.

"The state record for the longest alligator is 14 feet, 3 1/2 inches, according to the Florida Fish and Wildlife Conservation committee. I don't know. Maybe that could be the biggest one ever found," WPTV's Mike Trim said.

The Florida Fish and Wildlife Conservation Commission says the alligator is real but has yet to confirm the official size.