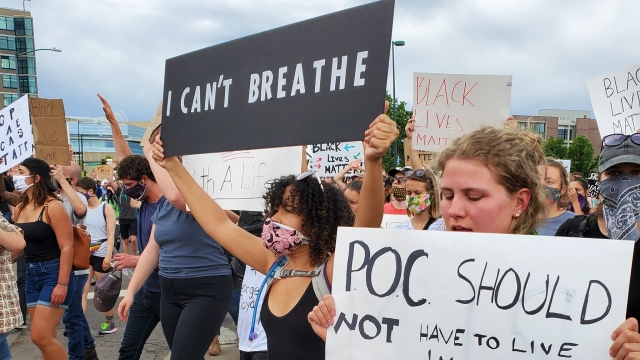 SMS
Mass Protests Could Lead To Surge In COVID-19 Cases
By Lindsey Theis
By Lindsey Theis
June 1, 2020
COVID-19 mainly spreads through close contact by large respiratory droplets, which are produced when someone sneezes, coughs or shouts.
SHOW TRANSCRIPT

Governors and mayors are warning that large protests can spread the coronavirus and cause a second surge of COVID-19 cases, just as many cities were beginning to open back up.

"If you were out protesting last night, you probably need to go get a COVID test this week. Because there's still a pandemic in America that's killing Black and brown people at higher numbers," Atlanta Mayor Keisha Lance Bottoms said during a Saturday briefing.

"This is, like, a really emotional, heavy thing for me. But I feel like it's really important for people to go out there even in a pandemic and say that this isn't OK," she told Newsy.

COVID-19 mainly spreads through close contact by large respiratory droplets, which happens when someone sneezes, coughs, shouts or yells. As protests continue, the World Health Organization shared new guidance on holding mass gatherings during a pandemic while local health departments are sharing tips on Twitter.

"We know just from demographics that it disproportionately hits certain aspects of our population harder than others. The other piece of it that I have concerns about is that, you know, we've seen that a lot of the people coming into these protests are coming in from other areas, and they come in from other cities or other maybe other communities, and then they'll be exposed in that one gigantic area. If they are exposed, they'll bring it back to their community, their hometowns. Their hometown has little to no spread of this. They may become a hotspot all of a sudden."

ER physician Eric Hill says he hasn’t seen a surge in protesters coming in sick, but he expects it.

"The incubation period can be up to 10 -14 days. And even if they do contract it around that time period, for them to become symptomatic enough to present to an ER might be the week after that, too. So I would not expect to see a spike in volume related to this for probably three or four weeks."

As for protesters, they don’t plan to stop demonstrating any time soon. Nicholle Harris says she plans to attend one tonight. She also plans to get tested for COVID-19.

"There is a very real possibility that I could get sick. And I hope that if I got sick, that I would beat getting COVID. And people are dying every day because of the police violence," she said.