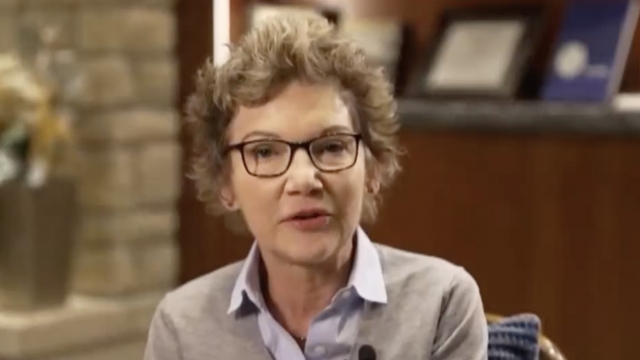 Record-high inflation continues to inflict pain on people and businesses and products across the country. From Main Street to Wall Street, the hurt is felt.

Stocks on Wall Street have lost more than 20% of their value so far this year, seeing one of the worst years in recent memory. If 2022 ended yesterday, this year would rank as the seventh-worst year for the stock market since 1928.

Also, new data from the Commerce Department shows the U.S. economy actually shrank during the first half of the year. The economy contracted by 2.2%, leaving some to wonder if inflation is pushing us toward a recession.

NEWSY'S JAY STRUBBERG: Inflation is still very high right now. The Fed has come under criticism for either not responding enough, responding too aggressively — it's been hit on both sides, so what do you say to the critics about how you all are handling inflation?

MARY C. DALY: Well, the first thing is: Our No. 1 priority is to get inflation down. American consumers, businesses are suffering with high inflation, which is eroding their lives and livelihoods. That is why we've taken a very rapid pace of increases — to bridle the economy, get demand back in line with supply and give relief on the inflation front. And we're starting to see the benefits of those rate increases. I'm here in Boise, Idaho. I'm seeing the housing market cool and people are feeling a little bit of relief, which is, frankly, very welcomed.

STRUBBERG: That may be the case, but that inflation rate is still above that 8% mark — not what we wanna see. I know you guys like to have it in that 2%-3% range so what more do you need to see to have that happen?

DALY: Well, we need to see a lot more relief on inflation. You're absolutely right. When I say there's a little that's welcomed, that is not full victory, by any means. And we really want inflation to be back around 2%, as you said, and that's going to take some time but the rate increases we've taken and the ones we project taking additionally are the ingredients to help bring inflation down. We're also seeing some relief on supply chains starting to form. Of course, those things together—relief on demand, demand a little bit slower and supply is a little bit better—that actually delivers the lower inflation that everybody wants.

STRUBBERG: There are some predictions, though, that say rates will go as high as 4.25%, and you guys have more meetings this year. How high are you going to go? How many more times are interest rates going to be hiked?

DALY: Well, we have two more meetings before the end of the year and each of those meetings have considerable data that has to come in before we actually sit down and discuss and debate. So, I do believe we will take additional rate hikes. I just think that's the right thing to do to bring the economy back in balance and give the relief on inflation we just talked about. But exactly how high we'll go by the end of the year? That depends on the data. I think that's the thing, when you get criticism from both sides — "We're not moving fast enough," "We're moving too fast" — It really is about being data-dependent. That's what I want all of your listeners to know. We don't have a pre-set course. We really look at the data that's incoming and we say, "What's the best thing to do for the economy?" Because, ultimately, if the economy is in a better, more sustainable shape and inflation is lower, everyone benefits. Every consumer, every business.

STRUBBERG: And with the Fed's actions, there's been more and more concern about pushing us into a recession. Do you guys fear that at all? Is it even a part of your calculation when you make the decision to raise rates?

DALY: That's a terrific question. I would say that, obviously, there's a sense that the economy is slowing. What I'm seeing, though, is we're still adding over 300,000 jobs per month in the U.S. economy. We only need 100,000 to just keep the unemployment rate steady. That's 200,000 more jobs than we need to keep unemployment where it is. So, that's not an economy that's teetering on recession. That's an economy that needs to slow to a sustainable pace. So, before we get ahead of ourselves and worry about recession, I think we should just get the economy slowing in the way that we need to, to give that all-important relief on inflation. And here in Boise, Idaho, which is a booming economy, I'm seeing that relief forming. It's moving from frenetic to something that feels more sustainable and that feels more practical for people—more like they can live their lives and they can stop thinking about inflation and they don't have to worry about catching up because they can just go back to living the life they want.

STRUBBERG: I know some of this talk about the Fed, the interest rate hikes can be filled with business lingo and jargon. Could you just explain, in the most basic terms, for people who may not be familiar with the financial terms, how a rise in interest rates affects things like credit cards, home loans, things like that?

DALY: Sure, absolutely. So the Federal Reserve raises the interest rate and what immediately happens is other interest rates—the ones that matter for people like a mortgage interest rate, your car loan rate, your credit card rate—those go up. When people face a higher cost of borrowing, they borrow less and they spend less. And then, that filters through the economy and it starts to slow demand. The place that I think is just easy to see this is, we, the Fed, raise interest rates. Mortgage rates just went up 6.7% printing right now and that slows housing demand. And when that slows housing demand, house price appreciation slows. And then, another really important thing that so many Americans face: rental price inflation starts to slow and that is just hitting the pocket books of Americans right now. It's high and rising. That slowing will give much welcomed relief. That combined with gas and food, that's a big portion of what Americans spend their money on and that's what we're looking for. That's how the interest rate policy we have works.

STRUBBERG: So many dominoes that fall from that decision. 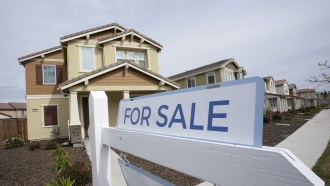 STRUBBERG: Researchers at your bank recently did a study that the work-from-home shift during the pandemic may account for more than half of overall home price increases and could be a major driver of inflation. So, explain that to us. How is working from home correlated with higher inflation?

DALY: Sure. So, what happened is that so many of us started working from home—and when we work from home, we have two things that happen: We want a bigger place to live. You don't want to live in a small place because you got a lot of family there and they're all trying to work from home, go to school from home. And then, you also live farther away from the location of the headquarters where you're working. A lot of people moved into these communities—here in Boise, Idaho, this really happened. A lot of people from coastal communities moved to Boise and they brought a lot of money with them and housing prices rose quite a bit here. Priced out most of the first-time home buyers, who had grown up in Boise or Idaho and that dynamic is happening not just here, but across the country and that has been the driver of home price and rental price inflation and overall inflation.

STRUBBERG: Just one ingredient to the overall picture here. The economy, of course, can be very complicated to unpack. There's the jobs, there's the employment rate, inflation — never easy to understand. But right now, it kind of feels like we're in a recession. On top of that, the U.S. GDP fell for the second straight quarter. In your opinion, how healthy is the economy right now? And are we slipping into a recession? Are we already in one?

DALY: Well, I look at a whole host of data. So, if you look at GDP — which, frankly, most people don't think about everyday...But if you ask most individuals, when I travel across—I have nine states in the United States, the whole western United States — I go to any of those states and here's what I see: Busier ports, filled up restaurants, people going to shows and games and just being out. I see an economy that feels good, feels solid. But the No. 1 concern everybody has, we all have, is inflation. Inflation is just too high. There's a sense of, "Wow, things feel good in one way but I'm falling behind every day, every month because my wages aren't keeping up with the prices. And, my business can't sell things at the import cost I have, can't pass that fully on to consumers...These are the things I feel." And so, what really has to happen — this is why the Feds resolute and bring the inflation down — we have to get inflation down. If we can get that to happen with these kinds of conditions, we'll go back to that sustainable sense of normal that we all crave.

STRUBBERG: It seems like you guys are prioritizing bringing inflation down, moreso than your fears of slipping into a recession. Is that a fair assessment that your main priority right now is on that high inflation?

DALY: It is our main priority. That's the thing that is the most out of balance. I mean, we mentioned it at the top of our discussion: Inflation printing is coming in over 8%. That is unsustainable and the important thing that I think people don't think about is that high inflation actually makes us vulnerable to the economy tipping over into a recession or falling into a bad situation. It just makes the economy more fragile. So, getting the inflation down is actually strengthening the economy, making a future for the economy and our future pace of growth much more sustainable and healthy.

STRUBBERG: In the meantime, inflation is still above 8%, so what is your message to impatient Americans out there who are struggling to pay their rent, other bills, on how they can save money right now. What do you say to them?

DALY: Well, we're seeing Americans do what Americans do. They're substituting, they're buying bigger quantities and sharing with their neighbors, they're making modifications in their spending behavior so that they can make ends meet. The other thing I want Americans to know is that the Federal Reserve is resolute. We're united. We're focused on bringing those numbers down. And so, while I won't get the 2% by the end of the year, they will start to come down. We're seeing some relief and we're going to keep working until that relief occurs for everybody.

STRUBBERG: So, you said not 2% by the end of the year. When is that going to happen?

DALY: Well, I'm hoping we can get there, because of supply chains and our policies, that we can get there in the end of 2023, and closer to 2024. But there's a big difference between 8% and 2%, and chipping away at that is going to feel like relief for people.