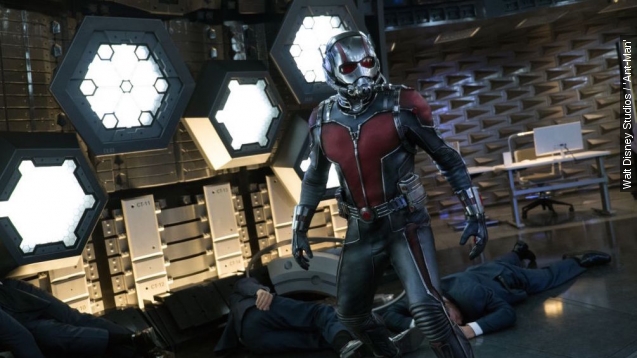 SMS
Marvel's 'Ant-Man' Shuts Down Early 'Dud' Predictions
By Eugene Daniels
By Eugene Daniels
July 19, 2015
For a film based on an obscure, somewhat silly character that received such lukewarm early reviews, "Ant-Man" actually had a pretty solid showing.
SHOW TRANSCRIPT

Marvel's tiniest superhero "Ant-Man" topped the box office this weekend, surprising some critics. The film took home $58 million and effectively shut down predictions it was destined to be a dud. (Video via Marvel Entertainment)

Before the film's release, some critics believed it would actually embarrass the big studio, ending its box office winning streak. One even said, "The choice to even make a film about such a silly sounding character is odd."

To be fair, the film did seem doomed from the start. "Ant-Man" was first announced at Comic-Con in 2006, but with two directors hitting the road before production started and multiple rewrites, it wasn't clear if Scott Lang — aka Ant-Man — and company were actually going to hit the big screen. (Video via Marvel Entertainment)

But the movie surpassed most expectations with a 92 percent audience score on Rotten Tomatoes, and it will probably benefit from a little word-of-mouth from fans. By the way, that score ties it for first along with "Captain America: The Winter Soldier" and "Guardians of the Galaxy" of the twelve Marvel Studios films. (Video via Marvel Entertainment)

In the grand scheme of things, $58 million isn't much in Marvel money, but considering the film stars such an obscure character and had such lukewarm early reviews, it could have been a lot worse.

With quite a few Marvel movies coming out in the next few years, it would be a while before we see a pint sized sequel, but Scott Lang will be back in "Captain America: Civil War."