Martin Shkreli Could Have More Beef With The Feds 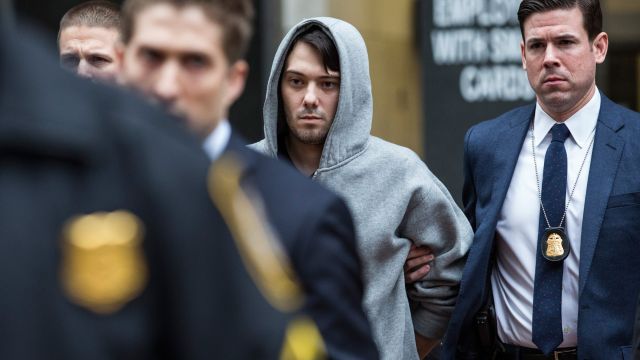 The former pharmaceutical CEO could face additional charges in his fraud case.

New York prosecutors will decide in the next month whether ex-pharmaceutical CEO Martin Shkreli will face more charges in his securities fraud case.

Prosecutors are now digging through over 2 million pages of additional evidence, which might lead to more charges. The 33-year-old is scheduled to face charges June 6.

Shkreli is accused of running a Ponzi-like scheme where he founded new companies and used their assets to pay off debts from other companies he owns.

The pharmaceutical entrepreneur first caught the public's eye in 2015, when his company raised the price of an AIDS and cancer medication by more than 5,000 percent. Many called the move blatant price-gouging.

And a pattern of eccentric behavior has kept Shkreli in the headlines ever since.

In January, he initiated a social media feud with the Wu-Tang Clan's Ghostface Killah, months after bidding $2 million to buy the only copy of an exclusive Wu-Tang Clan album. Shkreli has since refused to share the music and even threatened to destroy his lone copy.

Ghostface Killah said: "I don't even know how it came to this like this. It's Ghost vs. Peter Pan in 2016."

In February, Shkreli appeared bored while testifying before a congressional committee for a separate case. He pleaded the Fifth to avoid answering almost every question and later on Twitter called the representatives "imbeciles."

Shkreli appeared distracted but answered "yes" after a long pause.

Shkreli insists he's innocent on all charges, tweeting to a supporter on Tuesday that he "didn't commit a crime."