Martin Shkreli Asks For Leniency Ahead Of Sentencing 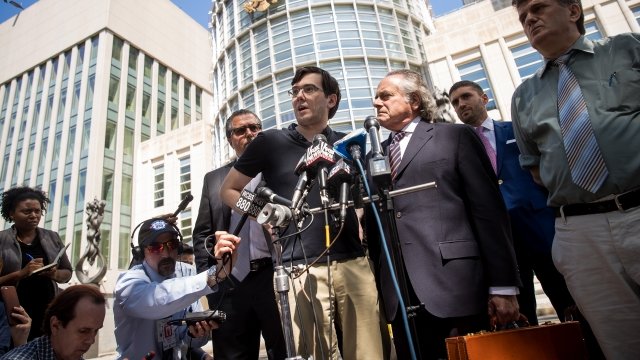 The former pharmaceutical CEO sent a letter to the judge saying, "I still believe that I am a good person with much potential."

Former pharmaceutical CEO Martin Shkreli asked a judge for leniency ahead of his sentencing later this month.

In a letter, Shkreli called himself "a fool" saying, "I accept the fact that I made serious mistakes, but I still believe that I am a good person with much potential."

In late 2015, the FBI arrested Shkreli on multiple fraud-related charges. Officials accused him of running a Ponzi-like scheme in which he founded new companies and used their assets to pay off debts from others he owned.

A Pharmaceutical Company Is Accused Of Starting An Opioid Scheme

A pharmaceutical company founder was charged with illegally distributing a fentanyl product.

Shkreli faces up to 20 years in prison, but his defense team asked the judge to impose a much lesser sentence — between 12 and 18 months. In addition, his lawyers propose he complete 2,000 hours of community service and undergo court-mandated therapy.

Shkreli's sentencing is scheduled for March 9.