Martin Says HBO's 'Game Of Thrones' Will Deviate From Books 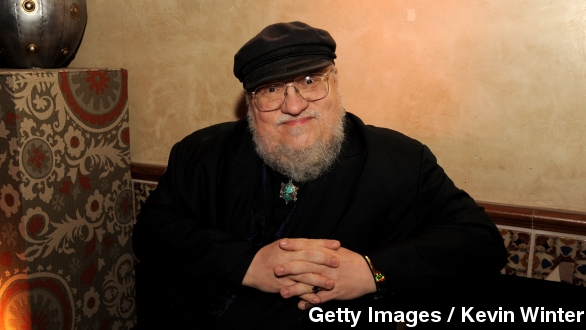 SMS
Martin Says HBO's 'Game Of Thrones' Will Deviate From Books
By Ben Lawson
By Ben Lawson
February 16, 2015
"A Song of Ice and Fire" author George R.R. Martin says that different characters will die this season on HBO's "Game of Thrones" than in his books.
SHOW TRANSCRIPT

Because everyone knowns "Game of Thrones" characters live too long as it is, George R.R. Martin has said the upcoming season of HBO's hit show is about to get even bloodier than his books.

"I'm not going to stop the wheel; I'm going to break the wheel," says a character from "Game of Thrones."

In an interview with Showbiz 411, Martin said this about season five of "Game of Thrones": "People are going to die who don’t die in the books, so even the book readers will be unhappy. So everybody better be on their toes. (Showrunners) David (Benioff) and D.B. (Weiss) are even bloodier than I am."

That's quite a statement considering the defining characteristic of Martin's storytelling is killing off key characters at the drop of a hat. (Video via TBS / "Conan")

This might be frustrating to some die-hard book fans who want the show to be faithful to its source material, but it shouldn't come as too much of a surprise.

Martin is currently working on the sixth installment in his "Song of Ice and Fire" series and still has one more to go after that.

And the show is getting dangerously close to catching up to the books. The fifth season is about to get into material from the fourth and fifth books.

Martin has said to not expect his next book, "The Winds of Winter," any time this year, and it's already been more than three and a half years since the previous book was released.

So it would be pretty unrealistic to think HBO would wait on Martin's notoriously slow writing for source material.

Both Martin and his HBO counterparts, Benioff and Weiss, have said they know where their story ends, but it's looking like they may get there in very different ways.

This video includes images from Getty Images and Jenea Medina / CC BY NC ND 2.0 and music from Broke For Free / CC BY 3.0.