A Voice For All Americans, MLK's Legacy Reaches Further Than You Think 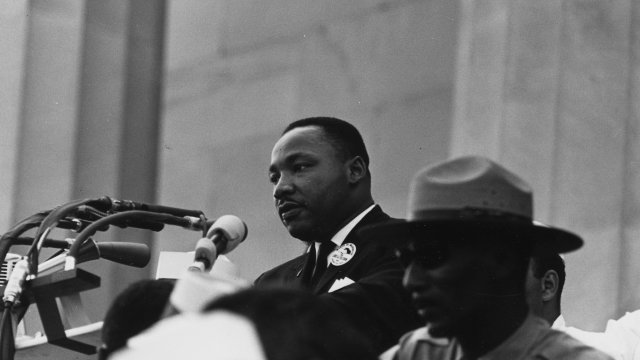 On April 4, 1968, James Earl Ray, an Illinois man with an extensive rap sheet, shot and killed Dr. Martin Luther King Jr., a preacher's son who rose to become perhaps the most revered civil rights leader in American history. Some historians allege there was a broader conspiracy into King's death.

Every year around this time, people visit the place where it happened: the Lorraine Motel in Memphis, Tennessee. A wreath hangs on the railing outside the second floor room Dr. King occupied, serving as a reminder of that tragic day that devastated America.

A half-century has passed since the preacher's death, but his powerful voice continues to influence generations. King's message of equality through nonviolent protest cemented him as the central figure of the civil rights movement.

From the historic March on Washington, an event punctuated by his famous "I Have A Dream" speech, to a five-day march from Selma to Montgomery, Alabama, when protesters demanding voting rights sustained beatings from state troopers.

King's influence ultimately led to the passage of the Civil Rights Act of 1964 and the Voting Rights Act a year later, monumental achievements in the push for racial equality.

And he focused on some other big issues in the years right before his death. In 1966, he moved to Chicago and helped launch the Chicago Freedom Movement, a campaign to break down discrimination barriers in housing. King would lead one peaceful march in support of open housing into Marquette Park, an area southwest of downtown, which, at the time, was all-white.

And things got ugly.

Racist counterprotesters hurled insults and objects. King himself was hit in the head by a rock but pressed on. He described the events up north as some of the worst displays of humanity he ever encountered.

King said, "I've been in many demonstrations all across the South, but I can say that I have never seen — even in Mississippi and Alabama — mobs as hostile and as hate-filled as I've seen here in Chicago."

Though he's widely admired now, King wasn't always so popular. According to Gallup polls, in 1963 more people had a positive view of King than a negative one. But by August of 1966, his popularity tanked: 63 percent gave him a thumbs-down.

King emerged as an outspoken opponent of the Vietnam War, a multi-pronged conflict that claimed the lives of more than 3 million people, including 58,000 Americans.

He delivered a speech in New York City on April 4, 1967, exactly one year before his death. In it, King unleashed a scathing rebuke of the U.S. for its role in the war after he had faced questions about his silence on the matter.

King called the American government the "greatest purveyor of violence in the world today." He said, "If America’s soul becomes totally poisoned, part of the autopsy must read 'Vietnam.'"

In the years leading up to his death, King became an advocate for wealth redistribution, and he fought for improving income inequality. According to the U.S. Census Bureau, in 1963, about 36 million people, or 20 percent of the U.S. population, lived below the poverty line, though it improved in the years after.

King called on the government to do more to help all Americans — not just black people — who struggled financially. And in the late 1960s, King helped spearhead the Poor People's Campaign, an effort to lift people out of poverty that continued after his death.

King once said, "If a man doesn't have a job or an income, he has neither life nor liberty nor the possibility for the pursuit of happiness."

In 1968, King also supported a sanitation workers' strike in Memphis. The workers walked off the job after a malfunctioning compactor crushed to death two trash collectors. They also demanded better pay and improved working conditions. Violence erupted during one protest, running counter to King's message of peaceful resistance.

On April 3, 1968, King addressed a crowd in Memphis. He called for an economic boycott and urged people to continue speaking out but told them not to resort to violence.

It was in this speech that King delivered his prophetic ending. King said: "Like anybody, I would like to live a long life. But I'm not concerned about that now. I may not get there with you. But I want you to know tonight that we, as a people, will get to the promised land!"

King was shot and killed the next day.