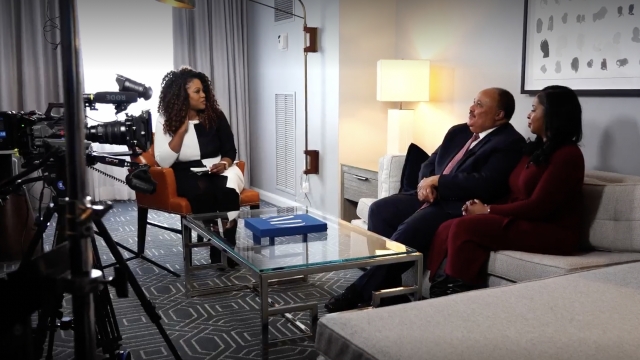 While the push for voting rights legislation may have failed in the Senate, Martin Luther King III says he plans to continue his father's mission.

Nearly 60 years after his father's march on Washington, Martin Luther King III continues the same strides with his wife, Arndrea right by his side.

"You know, it feels the same because what you've had is 19 states so far — with more potentially coming on board this year — to impose over 34 pieces of legislation to make it harder to vote," Martin Luther King III said.

The John Lewis Voting Rights Advancement Act, which is named after his late father's friend, would require certain states to have federal approval before changing voting law. And the Freedom to Vote Act, which he says directly impacts Black Americans, would do things like make Election Day a federal holiday. Both bills are all but dead in the Senate, where Republicans call the measures Democrat-led power moves and say voting rights should be left to the states.

"Right now, looking at Ukraine and Russia and saying that the reason we're interested there is because we want to help protect and we want to help retain democracy and have others around it. But yet you're suppressing democracy at home," Martin Luther King III said. "People need to ask 'What's wrong with you?'"

The Kings have been on a coast-to-coast mission to invigorate voters ahead of the midterms, reminding them of the work of people like Martin Luther King Jr. and Lewis. For them, it's a matter of faith.

"When you think about the civil rights movement and you think about the mass meetings, when you think about, you know, every night they would come together in the church. And yes, it was to get instructions for the next day. But most importantly, it was for them to have a moment to renew their faith so that they can keep going and that's what got them through. And it's what's continuing to get us through," Arndrea King said.

It doesn't stop with mom and dad. The Kings' 13-year-old daughter, Yolanda, is also traveling the country speaking on a number of social justice issues.

Being parents, education is front of line for the Kings — especially when that education includes Martin Luther King's words, which are often used to push for concepts like a "color blind" society.

NEWSY'S AMBER STRONG: Are you concerned that your father's legacy and history within itself is sort of being co-opted?

MARTIN LUTHER KING III: Oh absolutely. I think probably more than anything else, I often say that people who don't remember their history are doomed to re-create the mistakes of their past. The problem is history is not being taught and an issue has been created that society has embraced called critical race theory, which is a false flag if you will. What I mean by that is this initiative where you're going to teach certain kind of history ... We need to know the history of everyone. Everyone. Every ethnic group has made contributions to our nation to make it what it is. And you can't not teach something because it was cruel and bad. People need to know about that so you do not repeat those mistakes of the past as one perspective.

The Kings say the battle for voting rights isn't dead, but simply deferred — especially in their home state of Georgia and across the country.

And while the weight of his parents' legacy has been placed on his shoulders, Martin Luther King III doesn't see it as a sign of pressure.

"They just wanted us to do — and any of us to do — what it is that fulfills us," he said. "Obviously I was tremendously inspired by what I saw them do. And then I saw wrong as I was growing up in the world and I felt compelled. Now I've got to do something at some point. It's my turn to carry this baton because what I do know is we have the ability to be much better than we are."