Marshawn Lynch And Starbucks Go 'Beast Mode' For A Cause 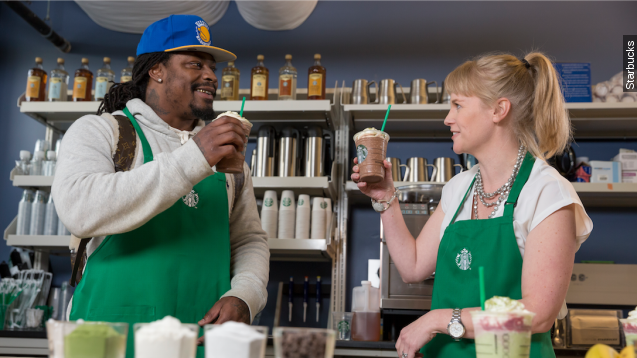 If you've got a long day ahead of you and a pumpkin spice latte just won't cut it, you can opt to go "beast mode" on your morning coffee.

"Shots for everybody," Marshawn Lynch said, toasting with his new drink.

"What's this called?" someone asked.

"Beast Mode," Lynch replied. "How'd you forget already? You forgot why I was here, baby?"

NFL running back Marshawn Lynch partnered with Starbucks to create the new drink, which is only available in Oakland, California, and Washington state.

It's described as "a double mocha Frappuccino with a hint of mint and cream and just enough protein powder to unleash your inner Beast Mode."

It's kind of surprising that Lynch's favorite treat of Skittles didn't make it into the drink, but he already has plenty of those. And the new Frappuccino will do more than just get you hyped. (Video via TBS)

Twenty-four cents from every Beast Mode Frappuccino sold will go to support Lynch's Fam 1st Family Foundation, which helps underprivileged youth from his hometown of Oakland by "mentoring them on the importance of education, literacy and self-esteem." (Video via ESPN)

Not to mention giving kids the opportunity to play football in front of an NFL superstar. (Video via Tacoma News Tribune)