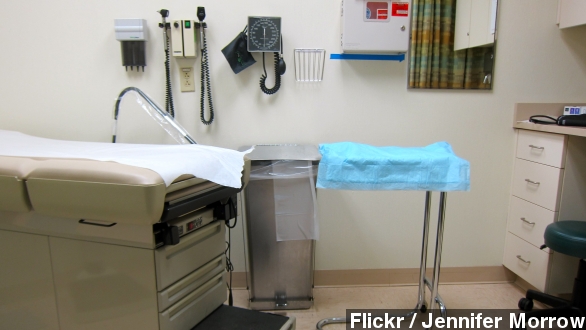 By Adam Falk
June 11, 2014
A new report shows married men are more likely to visit the doctor regularly. Men living with a significant other were least likely to get a checkup.
SHOW TRANSCRIPT

If you value your health, then you've probably put a ring on it.

A report released Wednesday from the National Center for Health Statistics says men are more likely to go into the doctor for regular checkups if they are married. (Via Centers for Disease Control and Prevention, Flickr / Matt Stratton)

And no, living with your significant other doesn’t cut it. In fact, you're worse off. The report says, “Cohabiting men were less likely than other not-married men to have had a health care visit.” (Via Flickr / Brenda Clarke)

76.3 percent of married men aged 18-64 had at least one health care visit in the past year. Single guys came in at 65.1 percent, followed by cohabitors at 60.3 percent. (Via  Flickr / Jennifer Morrow)

And according to NBC, this surprised a senior scientist at the Centers for Disease Control and Prevention, who speculates on why “live-in” significant others don’t play the same health-promoting role.

“Maybe wives are more willing to actually make the doctor’s appointment for their husbands or maybe men are more likely to listen to their wives than to their girlfriends.”

The report says, yes, spouses play an active role in encouraging check ups, but they can also “indirectly evok[e] in men a sense of economic and social obligation to the family” that could prompt a doctor visit. (Via Centers for Disease Control and Prevention)

Some experts say this is consistent with previous knowledge that married men enjoy more health benefits than unmarried men.

However, an associate professor at Cornell University told LiveScience, “The new study did not take into account all the ways that married and cohabiting couples differ, it's difficult to determine the exact reasons behind the new findings.”

One thing is clear though, health insurance matters. Only 42.6 percent of uninsured men visited the doctor that year, compared to 78.6 for men who had insurance. (Via Flickr / Douglas Sprott)

So maybe before you put a ring on it, make sure you're insured.