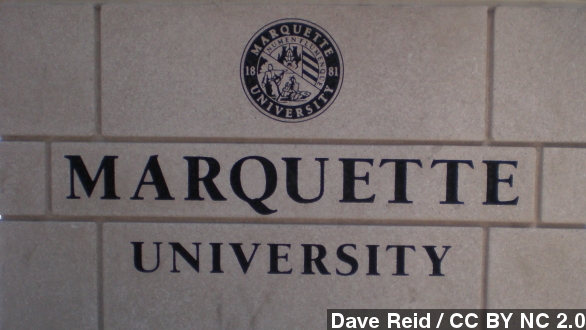 SMS
Marquette 'Suspends' Professor Over Gay Marriage Blog Posts
By Jake Godin
By Jake Godin
December 19, 2014
Marquette University says one of its professors is under review for a blog post he wrote in November criticizing another faculty member at the school.
SHOW TRANSCRIPT

A Marquette University associate professor says he was suspended with pay after writing a blog post that criticized a teaching assistant for not allowing a gay marriage debate in her philosophy class.

The faculty member, John McAdams, told Fox News: "A key thing about political correctness is they don't want to argue issues. They basically want to shut up the other side. Their basic message is 'shut up.'"

The story starts back in November, when a teaching assistant allegedly told a Marquette University student he wasn't allowed to debate gay marriage in a theory of ethics class.

That TA, graduate student Cheryl Abbate, supposedly told the student the debate wouldn't be allowed on the basis that it'd be homophobic and against school policy. The student then dropped the class.

That's when John McAdams took to his Marquette Warrior blog and criticized Abbate, saying she was "using a tactic typical among liberals," framing the gay marriage debate as offensive and therefore unacceptable in her class.

Abbate contested McAdams' blog post on a philosophy news site, the Daily NOUS, saying while a student did approach her complaining about the lack of a gay marriage debate, she didn't say the debate would be homophobic and figured there wouldn't be time for one.

McAdams' blog post and the controversy made their own headlines later that month.

Fast forward to Dec. 16. McAdams says the university has suspended him until further notice.

The university spokesman told the Sentinel that McAdams was put under review to see if he acted "overtly discourteous, abusive or disrespectful" towards Abbate, who is still considered a student at the university.

This video includes an image from Dave Reid / CC BY NC 2.0.