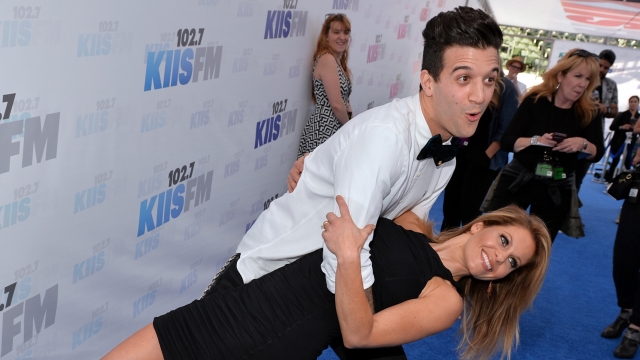 SMS
Mark Ballas Isn't Sure He'll Return For 'DWTS' Season 23 After Injury
By Newsy Staff
By Newsy Staff
June 11, 2016
Ballas is still dealing with back pain after an injury during last season's "Dancing With the Stars."
SHOW TRANSCRIPT

"Dancing With the Stars" may have to move on next season without one of its most popular dancers.

Longtime dancer Mark Ballas may bow out of Season 23 — yes, we've done this 22 times now — because of back issues. Still, the show isn't expected to come back until the fall, so Ballas told People he's still not sure what he'll do.

He told the outlet: "I'm not sure yet. This one just finished and my back still hurts. Thinking that far ahead is kind of ... you know, it's hard."

Ballas also has a wedding to think about after his engagement to longtime Alexander Jean bandmate BC Jean.

After so many seasons, ABC's hit show isn't exactly known for bringing in A-listers to compete, but it has launched the careers of its premier dancers like Ballas, the Hough siblings and the Chmerkovskiy brothers. So, losing Ballas for a season could hurt.

"Dancing With the Stars'" ratings also hit a record low for its season debut this past March, but it still drew enough viewers to win its time slot.

Ballas has twice won the coveted Mirrorball Trophy — once in season six with partner Kristi Yamaguchi, and again in season eight with Shawn Johnson. In this most recent season, Ballas and mixed martial arts fighter Paige VanZant came close, finishing as runner-up to Nyle DiMarco and his partner Peta Murgatroyd. ABC hasn't yet released the list of contestants for Season 23, which is expected to debut in September.

This video includes clips from ABC, People and Weed Eater Records, and images from Getty Images.