Marino Becomes Biggest Name To Sue NFL, So Why'd He Do It? 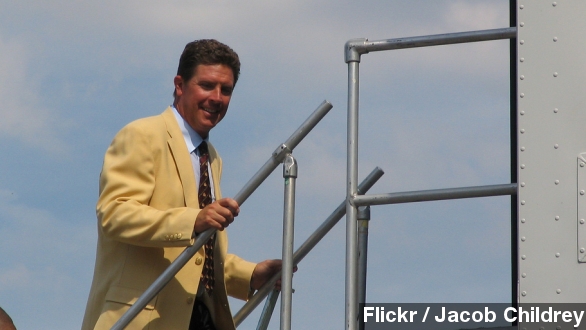 SMS
Marino Becomes Biggest Name To Sue NFL, So Why'd He Do It?

By Cliff Judy
June 3, 2014
As one writer put it, Marino is "about the last guy" anyone expected to bring a concussion suit against the NFL.
SHOW TRANSCRIPT

He donned the yellow jacket and is undeniably one of the most prolific passers in the history of the game. Dan Marino — now the biggest name to sue professional football. (Via Flickr / Jacob Childrey)

THOMAS ROBERTS, MSNBC ANCHOR: "The group joins more than 4,800 others who have alleged the NFL misled players about the long-term effects of concussions. The league agreed to a $765 million settlement with the original group of players last August."

Los Angeles Times broke the story late Monday night reporting Marino and 14 other players filed their suit last week, which does not specify any medical symptoms the Hall of Fame quarterback is suffering from.

For those of you who thought the NFL concussion issue was over, a federal judge rejected last summer's seemingly huge settlement, concerned it wasn't enough money for the long-term medical care of 20,000 retired players. (Via ESPN)

JOEY JACKSON, CNN LEGAL ANALYST: "But if you know that it's a dangerous sport, obviously that's a decision that you have to make."

COY WIRE, RETIRED NFL PLAYER: "Thank goodness we know because of the media — the problems that are arising because of head trauma. The players then didn't know. I'm one of them."

While three quarters of a billion dollars may seem like a lot, it comes out to about $40,000 a player. Add in the fact that the settlement payments would be split among 32 teams in a league with annual revenues estimated at $9 billion, and you see why some hailed last year's agreement as a bargain for the NFL.

LESTER MUNSON, ESPN LEGAL ANALYST: "It really does not amount to much money, and the players are beginning to understand that. Dan Marino, one of the great names in the history of the league, is now among them."

Sports Illustrated's Peter King noted a popular theory floating around that Marino might be playing the role of a spurned lover after being fired as an on-air analyst for CBS earlier this year, but King largely downplayed that theory.

"The one thing we do know is this: Marino is about the last guy most of us ever expected to see sue the NFL, claiming it hid what it knew about concussions. ... His inclusion in the suit could be a damaging one for the NFL."

The NFL has repeatedly denied it misled players or withheld information on the long-term effects of concussions. Los Angeles Times reports one of Marino's attorneys is co-counsel for the larger class-action suit against the league.