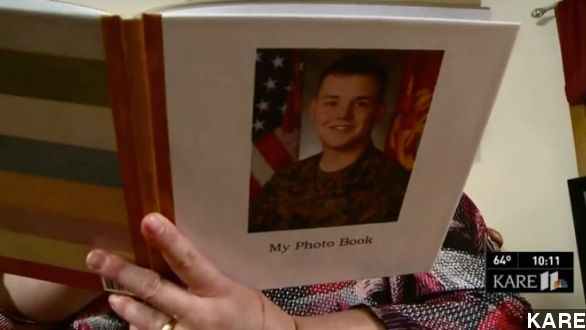 By Matt Moreno
September 25, 2014
The mother of Cpl. Jordan Buisman says someone changed his appointment and scheduled another after the former Marine died in 2012.
SHOW TRANSCRIPT

That's what the mother of Corporal Jordan Buisman says.

YOUTUBE / LISA RILEY: "He served honorably in the Marine Corp before being discharged due to his epilepsy."

His mother, Lisa, says Jordan was was forced to wait 70 days to get an appointment regarding the recent seizures he'd been having. Buisman died on November 26, 2012.

USA TODAY / KARE: "Four days after his death, on the following Friday, November 30, someone wrote in these official VA records that Jordan Buisman cancelled his neurology appointment scheduled in late December, and, as amazing as it may seem, requested another date."

Jordan's story is, unfortunately, one of many throughout the country involving veterans and their issues with Veterans Affairs.

The issues came to a head in April 2014 when a report about the VA hospital in Phoenix indicated as many as 40 U.S. veterans died while waiting for care.

CNN: "A few minutes ago, Secretary Shinseki offered me his own resignation. With considerable regret, I accepted."

Although the VA has made changes and fired many staff involved in the scandal, it's also denied several claims made against it, saying long wait times weren't the primary cause of death in many cases.

In an investigation into the claims, the VA denied veterans died due to waiting for care, but instead blamed it on the quality of care.

CBS: "The report does not answer specific charges raised by widows of veterans like Debbie Vijay."

"It took two months to see ... his cancer doctor when they found out he did have cancer."

And Buisman's story about records possibly being falsified isn't a new claim either.

USA Today reports workers at the VA Department in Fort Collins were told to falsify records so it would appear doctors were seeing patients within their goal of 14 days.

KARE reports an NYU doctor who reviewed Buisman's records said he had "more than a 50% chance he would be alive now."