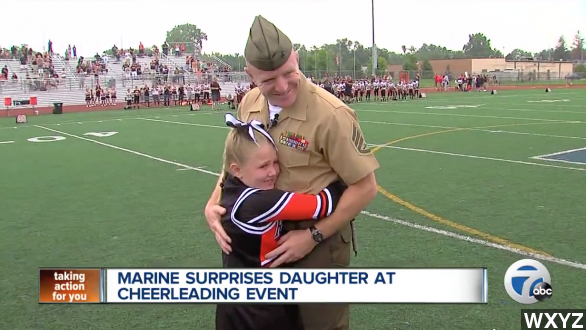 What likely started out as just an ordinary youth football game turned into a heartwarming reunion for a Michigan 8-year-old.

Kayleigh Potter was at her first cheerleading event for the Farmington Rockets in Detroit. But she had no idea her Marine dad was lurking center field. (Video via WJBK)

Staff Sgt. Jeffrey Potter enlisted with the Marines 13 years ago and is often overseas. He's been deployed to Iraq three times.

WJBK reports Potter was previously living in North Carolina and is now stationed in Virginia. He only came home to Michigan for the weekend.

WJBK, Kayleigh Potter: "I just ran straight to him and gave him a huge hug."

WXYZ, Jeffrey Potter: "It's hard being away from her. But coming home and doing this every now and then is definitely worth being away sometimes."

You've seen other military reunion videos in recent months— at schools, graduations and sports events all around the country. That element of surprise is what's always so heartwarming to witness.

As for 8-year-old Kayleigh, she says she's very proud of her Marine dad, who plans to head back to his station in Virginia after a few days at home.